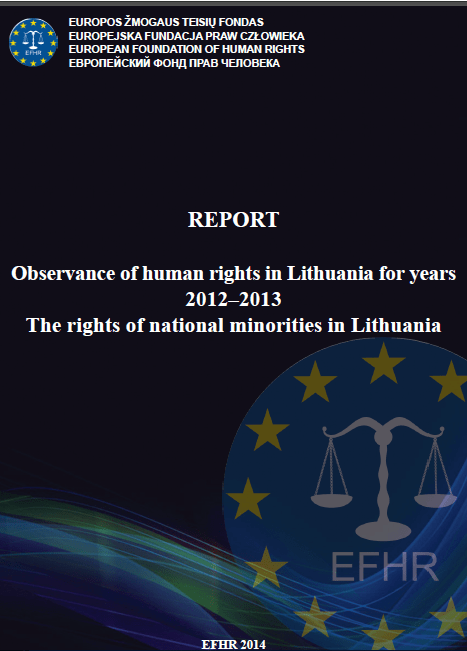 The European Foundation of Human Rights (EFHR), a non-governmental organization established in Lithuania in 2010, was created as a response to the increasing number of human rights violations and the subsequent greater urge for the protection of these rights.

In the report it is stated that since Lithuania’s joining of the EU, human rights in Lithuania show regress rather than progress. Analysis of the situation reveals that blatant shortcomings regarding the lack of core legal documents such as a Law on National Minorities and a refusal to ratify the European  Charter for Regional or Minority Languages, or anti-discrimination regulations (discriminating Law on Education, regulating the issues connected to the usage of minority languages, implementing special treatment for national minorities during the Lithuanian language examination).

Lithuania seems to lack legal solutions to regulate and guarantee the rights of national minorities. Such a course of events is taking place despite the country accepting numerous international legal obligations concerned with particular protection of this social group. Lithuania is therefore the only European country which firstly ratified the Framework Convention for Protection of National Minorities and then let the Law on National Minorities expire. Thus, since 2012, there is a lack of protective law for this part of the society. As a consequence, it engenders numerous problems and violations.

Moreover, what is to be noted is the lack of will on the part of politicians to improve this situation, in spite of undertakings by social groups threatened by discrimination, grassroots civic initiatives and even discernible signals from various international and non-governmental organizations.

Numerous EFHR interventions also suggest that Lithuanian society is still, to a large extent, unaware of certain standards and assurances concerned with human rights. A lack of substantial knowledge about human rights and a growing intolerance towards national minorities together with negative reports of national and international organizations confirming such a state of affairs are bound to lead to the conclusion that Lithuania is no longer at a crossroads but, instead, on the road to losing its way altogether. The country seems undecided as to which direction to opt for – whether it should be a developing democratic country, fully adhering to European standards, or to remain a country unable to guarantee the protection of basic human rights. Low awareness of human rights and boundaries, whose crossing triggers the immediate violation of human rights, results in an increased crime rate, especially where Internet crimes are concerned, and this is proved by over 400 applications provided  to the prosecutors’ offices by EFHR to report on the hatred disseminated via the Internet.

Unfortunately, Lithuanians, especially the national minorities’ representatives, are frequently insufficiently familiar with the ways of exercising their own rights, and according to the verdicts from the  last few years, the Lithuanian judiciary is still unfavourable with respect to this issue. Indeed, the Lithuanian courts, when examining a given case, routinely neglect Lithuania’s  numerous international obligations – in particular those connected with national minorities. Thus, in the process of exercising the rights of national minorities in Lithuania, it is vital to urgently appeal for the support and help of independent regional and international institutions, such as that provided by the European Court of Justice, the European Court of Human Rights and the Petition Committee of the European Parliament etc.

EFHR claims that Lithuania should accept the law protecting national minorities as soon as possible, to join modern countries based upon the rule of law and respect for human rights and the principle of caring for the protection of the weakest individuals. The level of democracy in a given country is determined by the way in which the majority treats the minorities.

According to EFHR, there is still a lot to be done in order to call Lithuania a fully democratic country of law, constituting an integral part of the European community. Despite the fact that many reports directly and tangibly indicate the shortcomings, both within the Lithuanian legislation and in practical activities and provide guidelines for improvement of the present state of affairs, the recommendations included will be useless unless the national authorities radically change their attitude.

Recommendations arising from the EFHR Report for years 2012–2013

I.        Adoption of law that would guarantee legal protection for national and ethnic minorities, arising from the international obligations adopted by Lithuania, especially:

II.       Quick adoption of the amendment of the Act on education, aimed at:

III.        Signing and ratifying the European Charter for Regional or Minority Languages of 1992.

VI.      Ratification of Protocol No. 12 to the Convention for the Protection of Human Rights and Fundamental Freedoms of 2000.

VI.       More active use of already existing international instruments, such as independent courts and international institutions, including the European Court of Justice, the European Court of Human Rights, the Committee on Petitions of the EP, OSCE High Commissioner on National Minorities and the UN Human Rights Committee, in resolving disputes and conflicts related to the protection of human rights. Independent institutions offer hope of the dissemination of good standards among society and state institutions that will contribute to more efficient implementation and dissemination of European standards on human rights.

VII.      Lithuania should examine and eliminate all cases of discrimination against national minorities, including issues of discrimination in the labour market and hate speech, through the monitoring of the Internet and imposing of appropriate penalties.

VIII.     Promotion of human rights and multiethnicity through i.e. respecting human rights and exercising the rights of national minorities, resulting from the membership of Lithuania in the European and international structures, and through increasing the number of training courses on human rights protection. Training should be held in every school, and schools should have easy access to the funds allocated for this purpose by the Ministry of Education and Science of the Republic of Lithuania.

IX.     Dissemination of information on human rights (how to fight for one’s rights, what rights belong to each person, what rights for national minorities arise from Lithuania’s membership in the EU and international organizations, how to exercise one’s rights?) among society, particularly among the most vulnerable groups, such as national, ethnic or religious minorities. The lack of basic knowledge of one’s rights is currently one of the main reasons for inaction of a substantial part of minority members, who do not know the basic mechanisms and methods of protections, so they remain unprotected in disputes with state institutions. It is also important to spread knowledge about human rights among the majority – in other words, the society of Lithuania – which, on the whole, is not aware of the fact that there are certain standards and safeguards for the protection of human rights of national minorities.

XI.   Lithuania should respect Article 16 of the Framework Convention and the European Commission for Democracy through Law (Venice Commission) included in the Code of Good Practice in Electoral Matters of 2002, which means that the state should i.e. refrain from measures altering the proportions of ethnic groups in areas inhabited by national minorities with the aim of restricting the rights and freedoms as provided for by the Framework Convention. Moreover, Lithuania should not change the boundaries of constituencies, breaking up the clusters of national minorities.

XII.     Allocating public funds for non-governmental organizations concerned with the protection of human rights in Lithuania. NGOs should be formally involved in the process of adopting all the laws in the field of human rights, and should receive consultative status with the right to challenge any decision of state institutions in this field.