9th of November: International Day against Fascism and Antisemitism

In 1933, after the Nazi Party rose to power, Jews became victims of the most discriminated violence perpetrated in world history. November 9th 1938 marks the date of the symbolic beginning of the Holocaust and the massive atrocities perpetrated by totalitarian regimes against the Jews, Roma people, disables and political opponents. During that night, synagogues were set on fire, Jewish homes, schools and businesses vandalized, and over one hundreds Jews killed. That was called Kristallnacht, “The Night of Broken Glass”, due to the broken windows of Jewish shops in the streets after these pogroms.

Eighty years from that episode, the number of racists, fascists and Neo-Nazis movements is increasing all over Europe. Indeed, groups are degrading and dehumanizing migrants and refugees, Jews, Muslims, LGBTQ-activists, minorities and people living with disabilities. Besides taking action in the streets and on social media, most of them are being part of countries parliaments and even governments. Thus, far-rights nationalists are chasing and attacking migrants, invading mosques and winning elections. The rise of extremists can be found all over the EU, including Germany, the “Casa Pound” in Italy, the “Golden Dawn” in Greece, Neo-Nazis in Ukraine, and others. Thus, it has never been more urgent to remember the 9th of November and the consequences of that night in 1938.

To commemorate it and to take a stand against contemporary forms of fascism and antisemitisms, every year UNITED Network organizes a European-wide campaign, involving various institutions and organizations. The slogan for this year’s campaign is “Speak up now! Fighting fascism is not radical, it is necessary!”. This is the 5th time for EFHR participating in UNITED activities for the 9th of November. During the previous campaigns, EFHR prepared presentations on racism and discrimination for students of the Faculty of Law of Vilnius University, also participated in anti-discrimination campaigns at the city centre, where EFHR team introduced the passerby to discrimination issues and provided free legal advice.

The slogan for this year’s campaign is “Speak up now! Fighting fascism is not radical, it is necessary!”. In relation to the even, EFHR has called community leaders, organizations and other public figures to cooperate and talk about what is important – fascism, racism and discrimination. The aim of this action is to make you an active citizen in our democracy, to spread awareness of the atrocities carried out during the Second World War, as well as providing a better chance not to repeat the history.

For more information on the campaign, please visit UNITED website at http://dayagainstfascism.eu/.

We hope that you will take few minutes to join our Europe-wide action and take a firm stand against racism and discrimination in Europe! 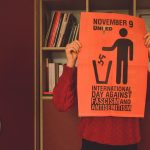 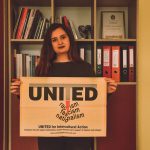 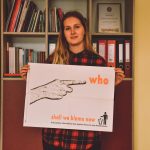 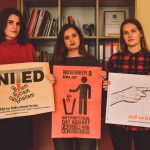 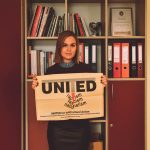 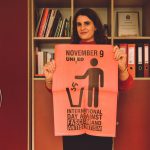