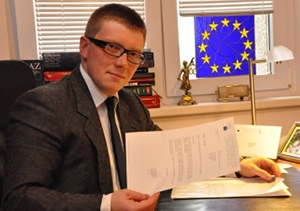 The European Foundation of Human Rights expressed its full appreciation for an initiative of assistant lecturer at the Department of Criminal Material and Executive Law and Judicial Psychiatry at the University of Gdańsk – Mr. Tomasz Snarski, who has submitted at March 31, 2011 a petition to the European Parliament, which tittle was “Lingual rights of Polish nationals living in Lithuania”. Its content will be discussed under frame of European Parliament’s Petition Committee work.

The main purpose of the petition is to draw the problem of lingual rights of Polish minority in Lithuania – from first names and surnames spelling, use of town’s signs or streets in minority language.  Moreover Mr. Snarski calls for obeying standards of European Human Rights System. Full text of the petition you can find here – http://www.efhr.eu/wp-content/uploads/2011/09/TomaszSnarski.petycja.pdf.

First actions has been already undertaken – at July 19th, Erminia Mazzoni, the chairman of  European Parliament’s Petition Committee reported that the petition has been already investigated by the Committee. Because of importance of matters brought up in the claim, the one has been recognized as acceptable and compatible with European Union’s area of activities.

European Parliament’s Petition Committee has launched the investigation of petition’s content and submitted a request to European Comission with a view to making a preliminary  approach to some aspects raised in the petition.

In order to achieve its strategic goal, which is a caring for human rights, the European Foundation of Human Rights hardly encourages you to sign letters of support for Mr. Snarski’s petition. An appropriate amount of such applications certainly would win international society’s attention for situation of Polish minority in Lithuania and would lead to make the issues claimed in the petition more credible. In fact, chances of the petition would be much greater.

Download  application form in pdf format of letter of support.

Download application form in doc-format of a letter of support.

The letter of support can be submitted by everyone on his/her own by postal mail at following address of the European Parliament’s Petition Committee:  European Parliament Committee on Petitions The Secretariat Rue WirtzB-1047 Bruxelles, via fax  +32 2 284 68 44. Anyway you may also send it via e-mail:  ip-PETI@europarl.europa.eu.

Another option is to fill the form published in European Parliament’s website: https://www.secure.europarl.europa.eu/parliament/public/petition/secured/submit.do?language=PL.

You may paste text of the petition or compose your own version. No charge for application!

If you want to submit your letter of support through the Foundation, send it at following address:

Liepkalnio 103, LT-02121, Vilnius. You may always visit us in our office every day at following hours:

The European Foundation of Human Rights does care about human rights. About your rights.

Translated by Ewelina Targosz within the framework of a traineeship programme of the European Foundation of Human Rights, www.efhr.eu