What happens next with proper names? 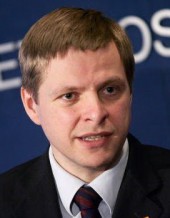 In the media, Lithuanian politicians increasingly express their opinions concerning the original spelling of names and surnames. Remigijus Šimašius, former Minister of Justice, voices his opinion in an article entitled “We lost our way between Warsaw and Vilnius”, which he has recently posted on his blog (http://www.simasius.lt/). The politician perceives the existing situation as unjust, with issues regarding internal politics and human rights becoming part of external politics. A name is something every man gets from their family, above all from their parents; the state plays a secondary part. “A name and a surname – they belong to a given person and their family, and not to the government. And this issue is a matter of human rights and deference to each and every human” – claims the politician.

One must admit that the question of the original spelling of names and surnames is still relevant. When considering the growing number of interracial marriages in Lithuania, we see that we have to solve this deeply rooted problem as soon as possible. What Mr. Remigijus Šimašius suggests on his blog is to allow for the usage of all the Latin signs on ID cards, and to create provisions that would regulate this aspect. They would provide solutions for situations in which the usage of diacritic marks is uncomfortable, they would tell how diacritic marks are to be changed into letters without such symbols.

The Lithuanian authorities still ignore the existing problem, even though each week there are people turning to embassies in order to renounce their Lithuanian citizenship. The main reason for this is the fact that they are unable to use their own name. They may be unhappy with the fact that the government seems to consider them a threat to the sovereignty of Lithuania.

The foundation has often pointed to the fact that the spelling of names and surnames is inextricably connected with a sense of identity, culture, and language. Legal systems of the EU member states should comply with the international regulations concerning the protection of national minorities, especially the Framework Convention for the Protection of National Minorities.

Further, another Lithuanian politician has rightly commented on writing public inscriptions in a language different from the state language (http://www.delfi.lt/news/ringas/politics/estanisauskas-gatviu-pavadinimai-lenku-kalba-ne-politiku-o-bendruomenes-patogumo-reikalas.d?id=60710445). The member of the city council of Vilnius has aptly noticed that the topic of renovating blocks of flats, so often discussed by the Lithuanian authorities, does not offend anyone. The renovation of blocks is a private issue and each inhabitant of a block of flats makes a decision about whether to concur with the renovation or not on their own. However, with regard private houses and signs placed on them, we deal with public interest.

The state of Lithuania is comprised not only of Lithuanian nationals, but also of numerous national minorities. These minority groups have been contributing to the development of Lithuania’s statehood and multicultural environment for centuries.

“Grammar is not established by the law” – claims Andrius Vaišnys, a journalist and a lecturer at Vilnius University’s Faculty of Communications (http://pl.delfi.lt/opinie/opinie/vaisnys-nazwiska-to-sprawa-gramatyki-nie-polityki.d?id=60714361). Neither names nor surnames are part of a language, so why should they be subject to its laws of grammar? The journalist also points to “the present-day grammar of the Lithuanian language” which, surprisingly enough, uses non-Lithuanian words (especially in proper names) and allows for letters like “q”, “w”, “ä”, “ö”, and others.

According to the foundation, the spelling of names and surnames and the writing of public inscriptions, should not become the subject of political disputes. The authorities, on the other hand, should approach the problem with a great deal of professionalism and should not exacerbate the conflict.

Translated by Agata Weronika Chrobak within the framework of a traineeship programme of the European Foundation of Human Rights, www.efhr.eu.