A week against racism 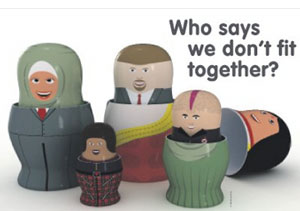 Changes in today’s society are taking place faster and faster. The meaning of terms such as state, nation, Europe are evolving slowly but inevitably. It can be openly said that the concept of national states from the 19th century is now outdated. In the Europe of today, there are no mono–ethnic countries. Historical influences, labour migration, tourism, business globalization etc. make people of different nationalities change their places of living for various reasons, settle in areas inhabited by other peoples and, in general, travel much more than they travelled in the past. Contact with representatives of various cultures or nations allows one to broaden one’s horizons and to see the world differently from new perspectives. It also creates new possibilities for improvement. Unfortunately, people with closed minds are everywhere, and these people discriminate against others on the basis of nationality, language or skin colour. These people are racists and nationalists. The “United” organization was founded in Amsterdam in 1993 to fight back against such attitudes. Its aim was to promote tolerance between different races and nationalities through increasing knowledge and awareness and promoting equality. It is not a local organization, but a European one. It co-operates with about 560 organisations with similar aims from other European countries. Such a European co-operation makes it possible to fight racism everywhere.

Every year in March “United” organizes the European “week against racism”, by co-coordinating various actions related to fighting intolerance and promoting equality, which are performed by organizations from all over Europe that cooperate with “United”. This year, EFHR will participate in this event for the second time (you can read about last year’s events “here: http://www.efhr.eu/2012/04/24/europejski-tydzien-akcji-przeciw-rasizmowi/). Within the framework of the project, between 18th and 22nd March the Foundation will organize a series of discussion meetings and workshops about multiculturalism, national minorities, human rights etc.

Please register for the meetings at info@efhr.eu

Moreover, on the 22nd March in the centre of Vilnius (Vincas Kudirkas square) the Foundation will organize an informative action about the legal instruments used to defend human rights, including the rights of minorities. There will be free legal advice, and discussions. We look forward to seeing you there!

The International Week Against Racism as a European and annual event proves two things. Firstly, the problem of intolerance exists and is still a serious concern. Secondly, the week proves that in each country there are people who have the courage to say “stop!” to intolerance.