The project ‘Evenings with the documentary’ has finished! 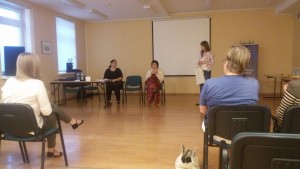 On  June 11th in the House of Polish Culture, the third and last film from the European Foundation of Human Rights (EFHR)’s ‘Evenings with the documentary’ project was shown.

For this final part of the project we watched ‘Ethnic Kitchen’. This film is a project from director Aistė Ptakauskė, who, together with the main characters from the film, was a guest during this event. The film shares the story of four non-Lithuanian women who have lived in Lithuania for many years.

After watching the film we discussed the story with director Aistė Ptakauskė, who told us where the idea of making this film came from. The director did not hide the fact that the choice of the characters follows such details as the cause of the women’s arrival in Lithuania and the time of their arrival – after Lithuania gained independence. Our guest also clarified the future of all the characters. However, one of the characters, Ms Bożena, provided us with her own impressions, explaining that it is not so easy to live in Lithuania and to attempt to prove all of the time that Romany people are equal to everybody else. When asked whether Lithuania might be her Promised Land, she replied that her roots are here and she is not going anywhere.

It is worth noting that the film has become popular not only in Lithuania but also abroad. The director revealed that in 2016 there is set to be another screening of the film. This screening will be part of an international project that will consist of cooperation between people from Ukraine, Belarus and Russia, and is strongly connected with the topic of dictatorship.

Congratulations to Živilė Bajorūnaitė and Agata Andrukianec who won cinema tickets for any film they choose.

EFHR would like to sincerely thank everyone who came and actively participated in the discussions that were organized throughout the project.

It was a great pleasure for us to spend “Evenings with the documentary” with you!

Two EFHR volunteers took part in the event and its preparation. They are with us due to the ‘Youth for Human Rights’ programme. More about the European Voluntary Service (EVS) and ERASMUS + can be read on our site.