Billingual plates – the end or the beginning of history? 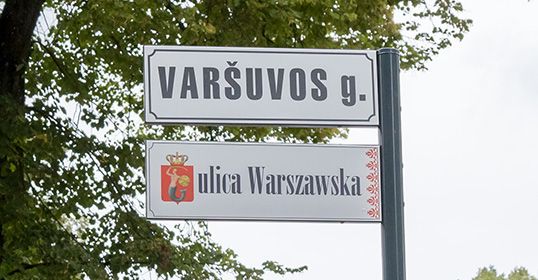 Three years ago the cases in the court were finished. They obligate the directors of local governments to pay fine for putting bilingual plates. From that time the compromise was held –  plates can be put up in private houses but public plates shall be written only in Lithuanian language.

In the beginning of 2017 the local government of Vilnius city was pushed to fight against decorative bilingual plates which were put up in the city as a symbol of the respect for local minorities. The court ruled that in the one case plates do not have official meaning and not defined by 1st part article. 17 of the rule of the state language. They do not have to be prepared for the meant article. The court ruled that plates which represent only decorative parts of the streets and are not the symbol of connections of Vilnius with one of the nation or community.

On the other hand this year on 18th July in Troki there was official opening of the plaza next to the bridge guiding to the castle. The castle was named on 1st June with the name og Szymon Firkowicz (1897-1982). On the pictures from the official opening there is visible plate in Lithuanian language and under it in Karaite language.

The convention which was ratified by Lithuanian Convention about protecting the national minorities sees that “In many regions where most of the people are from the national minorities live – The Sides will be trying to put the plates on with the names of the streets, local names, and other topographic features if there is such a need in those areas in minority languages – fully lawfully according to acts. Unfortunately even with the existing rules Lithuania will not put the regulations  and do not allow for plates in minorities languages.

That is why representors of the local government Vilnius city and Trakai city are pushed to put only decorative plates on in minorities languages. That must change the print of the text to give the text decorative elements. Is not this an absurd? Yes it is, but solutions are not absurd only existing prohibitions.

The article which was published by European Foundation of Human Rights titled “Bilingual plates in European Union is a standard” generalizes the situation in Europe – in Poland, Austria, Croatia, Estonia, France, Germany, and many other European countries that bilingual plates are not the topic of the discussion because they do consider the law of the minorities.

Supreme Administrative Court of Lithuania ruled in 2009 that “applying regulation of the Convention  is not obligatory. The country after the ratification of the Convention has conditions that means it has to relate on 3 part of art. 11 “according to existing law”, ” with considering existing specific conditions”, “if there is the sufficient need for such marks”. According to this and 2 part: Art. 2 Convention Lithuanian Republic Government  is obligated to regulate the general Convention about the protection of the national minorities which do not subject to regulations of Republic of Lithuania.

From the rule of the Court in 2009 there was any plan prepared for such the procedures. The needed “unity” of nation by the government looks fake and is inconsistent with international obligations. Accordant to this, without any specific regulation we will still be looking “almost legal” bilingual plates which are put on the private houses. The workers of the local governments can still develop their creativity by decorating the plates.