“W” lawful in Lithuania after all 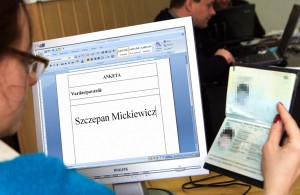 The European Foundation of Human Rights (EFHR) has once again detected the hypocrisy of contradictory legal acts and practices which concern the original spelling of names and surnames in official documents. Today dozens, if not thousands of Lithuanian citizens struggle with the problem of name spelling.

Naturally, the EFHR perfectly agrees with that. However, several Lithuanian governmental institutions and politicians claim with full conviction that in Lithuanian documents there must be only Lithuanian spelling. They also state that family names are parts of the Lithuanian language, so such letters as “w,” “q,” or “x” pose a threat not only to the language itself, but also to the whole state of Lithuania.

Nonetheless, facts prove something else. At the request to the Bureau of Population Records (Gyventojų registro tarnyba prie VRM), the EFHR has received a list of non-Lithuanian names and surnames officially registered in Lithuania.

Thus, it turns out that in Lithuania there have been almost 8800 cases of legally registered first names like Katarzyna, Ewa, Tadeusz, Matthew, Joanna, or Odetta, and surnames like Leszczynska, Szczerba, Szulc, or Brown. Consequently, it may be deduced that non-Lithuanian letters and letter combinations like “rz,” “cz,” “sz,” “nn,” or “tt” are not dangerous to Lithuania’s interests as a state.

The European Court of Human Rights (ECHR) has already stated in a couple of its rulings that regulations concerning the spelling of names and surnames lie in the domain of each member country, as names are tightly linked to a particular linguistic culture, history, and national identity. Nevertheless, the Court has also mentioned that each state has to obey the adjudications of the ECHR, and that each legal norm has to be objectively justified and equally binding for all citizens.

A ruling of the ECHR from year 2007, Johansson v. Finland (application no.10163/02), states that parents are entitled to choose whichever name they want for their child. Also, the ruling mentions that legal restrictions concerning name changing may be justified by public interest, e.g. by keeping precise population records or by easy and proper identification of a person. Furthermore, it decides that if a name figures in the population records and does not have any negative impact on preserving the linguistic and cultural heritage of a country, there are no reasons to prohibit the name from being registered.

Lithuania is a country of many nationalities, each of which uses names and surnames related to its linguistic heritage. According to the Convention for the Protection of Human Rights and Fundamental Freedoms, everybody has the right to respect for their private and family life. Moreover, the issue of original name spelling is becoming more and more topical, as over 16 % of marriages set up in Lithuania every year are bi-national (i.e. one of the spouses comes from a foreign country). Plus, the number of children with Lithuanian citizenship born outside Lithuania has risen from not quite 1% (2001) to as many as 16%  (2011). Thus, it appears that the question of original name spelling affects large masses of Lithuanians.

Taking into account international judicature and our findings about non-Lithuanian names registered in Lithuania, we encourage everybody to make use of the possibility of changing their lithuanized names into ones that include the non-Lithuanian letter combinations that have been already registered in the Bureau of Population Records.