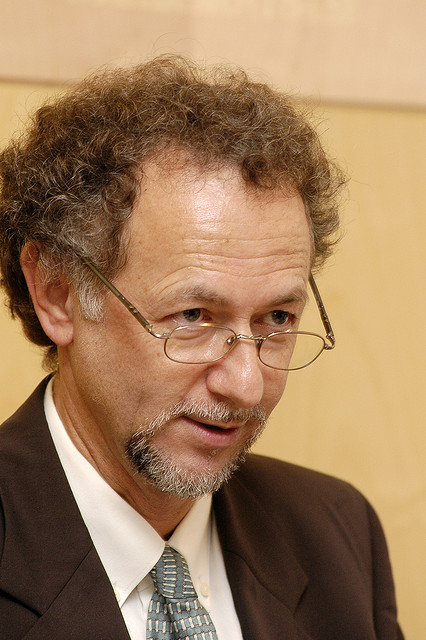 One of the most famous experts in defending human rights, professor Fernand de Varennes has visited Lithuania. He is considered one of the best specialists in the domain of linguistic human rights. His most famous works, for which he was distinguished, are Language, Minorities and Human Rights (1996) and A Guide to the Rights of Minorities and Language (2001).

He commented the present complicated situation of the Polish national minority in Lithuania in an objective way,. He pointed out that Lithuania has ratified the Framework Convention for the Protection of National Minorities, which includes regulations concerning names of streets. According to the Convention, in a locality, where representatives of a national minority make up the majority of inhabitants, states should take actions to provide the names of streets in the language of the national minority. Since the ratified Convention is an integral part of the Lithuanian legal system, one obvious conclusion can be drawn – Lithuanian authorities should respect certain laws.

Moreover, professor Fernand de Varennes emphasized that the Convention relates only to historical minorities and traditional groups in a population. Emigrants, such as, for example Lithuanian people in London or Poles in Dublin do not make a national minority in the sense, in which it is defined in the Framework Convention. Therefore, representatives of a national minority, if they are to be able to fight for respecting the discussed right, should make up at least 10% of inhabitants of a given area. Emigrants do not comprise the required percentage of people; therefore they are not treated as a national minority. Polish community in some villages or towns of the Vilnius region makes up the majority or, in some of them, the percentage may be higher than 50%.

In the opinion of the European Foundation of Human Rights, the visit of the famous expert in human rights may be an impulse for the Lithuanian authorities, thinking over their stance in the matter of human rights in Lithuania, to for instance initiate the process of adopting a new Act on protection of national minorities.

The Foundation fully agrees with the Professor’s argument and believes that Lithuania should fulfil the willingly accepted international responsibilities regarding protection of the rights of national minorities as soon as possible. In our opinion the threshold of 10% of population, at which minorities’ rights should be claimed on a given territory is a good one, and the rule should be implemented in the Lithuanian law.

Professor Fernand de Varennes in 1988 obtained a BA degree in the law in Canada, and an MA degree in the London Institute of Economy and Political Science. In 1996 he obtained his Ph.D. degree in the Netherlands, in the Maastricht University.

F. Varennes founded, among others, the school of first LL.M (Latin- Legum Magister, commonly recognised Master of Laws degree) in the field of human rights. He taught students in Europe, Asia, North America and Australia. He has been an advisory member in many world research centres, he has written over 150 articles and books. Currently, he is writing a new book on linguistic rights and a 3 volume book on ethnic and international conflicts.