European Foundation of Human Rights on a project in Cyprus 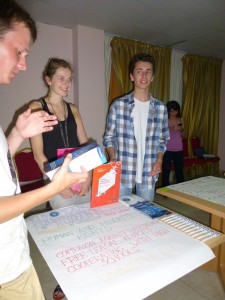 “Magnifying glass: debate on minorities’ problems!” – this is the topic of the latest project in which the European Foundation of Human Rights has participated in Larnaca, on Cyprus. The project was organised by the TDM 2000 organisation, which celebrated its 14th anniversary of foundation this year.

The project was mainly based on working in groups and on integration between participants. Various matters related to problems faced by minorities in different European states were discussed. These were for instance legal matters, employment issues, living conditions and cases of discrimination. Participants were also analysing particular cases of coexistence between minorities and their integration in a given state; then, they tried to find a solution for problems that exist and also ways for preventing them from happening in future.

Cyprus is currently divided into two parts: Cyprus and Northern Cyprus, which is formally considered to be an independent state by Turkey only, and it’s inhabited majorly by Turkish people. It was not without a reason that the place was chosen as the location for realising the project. Participants had the chance to spend a day in the town of Pyla, which is the only place on Cyprus where the Turkish and Greek minorities live in a community. They could also talk to the mayor of the city as well as its inhabitants and UN representatives who stay there.

The European Foundation of Human Rights was represented by Krzysztof Adam Górski, who was one of the three Foundation’s representatives in the project. “It was an amazing chance to see two completely different cultures in one city, Pyla, where they blend and complete each other, but they are still independent and autonomous. The very idea of theproject was also a good one, realised in an interesting way. The international atmosphere gave us a chance to see and know new things, as well as to taste regional cuisine during the ‘international night’ “.

During the presentation of organisations, the EuropeanFoundation of Human Rights has gained wide interest among other participants, who were willing to cooperate and exchange valuable experience in various spheres of the protection of national minorities’ rights.

We encourage you to apply for participation in international projects and conferences, about which we post up-to-date information on our website (www.efhr.eu).