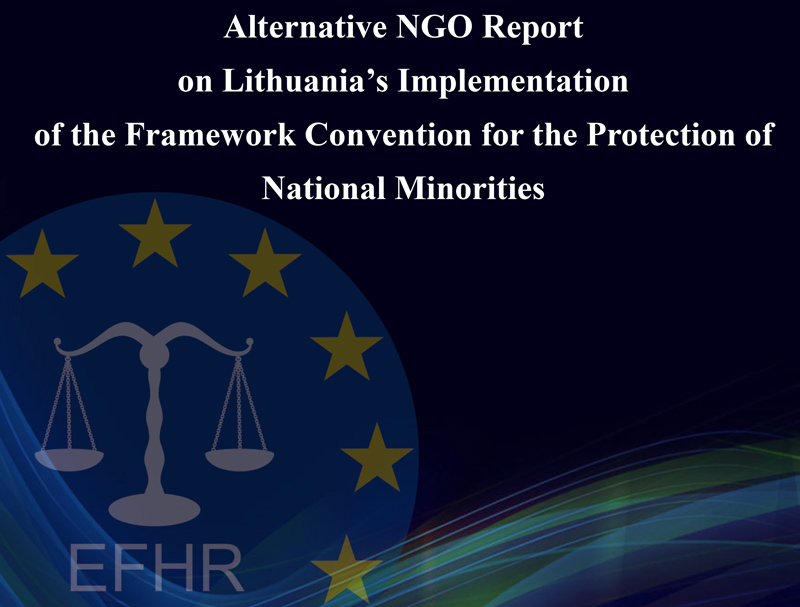 Summary of the Report:

The European Foundation of Human Rights’ (EFHR) alternative report aims to highlight the protection of minorities since Lithuania’s ratification of the Framework Convention for the Protection of the Rights of National Minorities (the ‘FCNM’) on 17 February 2000 (the treaty came into force in Lithuania on 1 July 2000). This report also provides data and documents that might be useful in better assessing Lithuania’s compliance with its legal obligations under this treaty. It should be emphasized that the criticism and praise it contains is offered in the hope of making Lithuania a stronger, more tolerant democracy fully respectful of its human rights obligations in respect of one of its most vulnerable groups of society: its national minorities.

One of the main conclusions of this report: the position of minorities has generally – and unfortunately – not improved markedly since Lithuania’s gaining of independence in 1990, the ratification of the FCNM on 17 February 2000 or Lithuania’s accession to the European Union in 2004. This is unfortunate because one would expect a trend towards increased compliance with Lithuania’s treaty obligations after ratification and the impact of more than 12 years of monitoring and recommendations from the FCNM’s Advisory Committee of Experts.

As a result, it appears that there are not only clear breaches of the country’s FCNM obligations, but more worryingly an increasing refusal of authorities to acknowledge or even to consider that their conduct needs to be measured by and comply with the standards set out in the FCNM in certain areas. The most obvious and recent example is the 1989 Law on National Minorities coming to an end in 2010; (as of 18 November 2013) the inability to agree on new legislation related to the rights of minorities; the reduction in the number of courses allowed to be taught in minority languages and their mandatory replacement by instruction in the Lithuanian language; the continued refusal to recognize and use non-Lithuanian names for citizens in most official activities; court judgments against bilingual street signs in areas inhabited by substantial numbers of national minorities etc.