Report of the Secretary General of the Council of Europe on “State of Democracy, Human Rights and the Rule of Law in Europe” 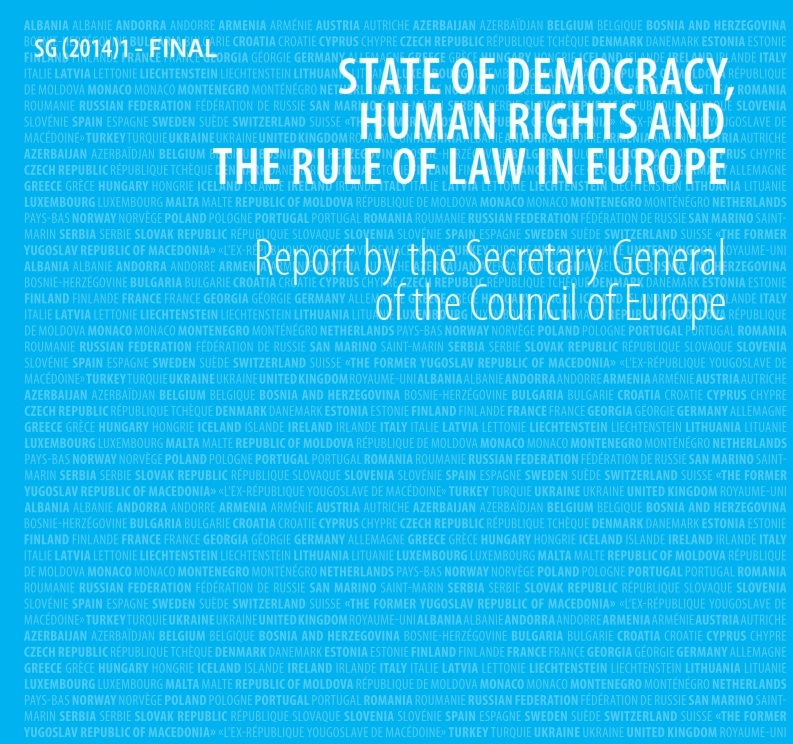 The challenges and recommendations cover several areas, such as: Respect for physical integrity and human dignity; Justice and the Rule of Law; Democracy; Social Rights; Non-discrimination and equality and the Council of Europe and unresolved conflict zones.

The “Respect for physical integrity and human dignity” includes the challenges of conditions of detention and trafficking and outlines recommendations to provide legal, administrative and practical safeguards to enable migrants to exercise basic rights without risking expulsion and protect those providing humanitarian aid from the risk of criminal sanctions’.

The “Justice and the Rule of Law” section is about the set-up and function of the judiciary, corruption and money laundering while the ‘Democracy’ heading covers political freedom, elections, democratic institutions and culture. The “Social Rights” section outlines how austerity policies undermine social rights and how there is an inconsistency between EU law and the principles of the European Social Charter. The recommendations include the ratification of the Social Charter and its collective complaints mechanism. A further recommendation is to enhance cooperation in the field of social rights, in terms of creating national action plans and sound training for legal practitioners.

The “Non-discrimination and equality” section looks at ethnic discrimination and national minorities, Roma, Gender Equality, sexual orientation and gender identity, children rights and other forms of discrimination targeting people with disabilities and immigrants. Some of the recommendations include: taking part in the No Hate Speech Campaign of the Council of Europe, promoting empowerment and participation of Roma, ratifying the Istanbul Convention (violence against women), sharing good practices on LGBT, building child-sensitive public services and reinforcing the equality of authorities in member states.

Furthermore, it outlines that most member states have developed tools to assist minority populations in preserving their identities. These tools include special schools with instruction in minority languages, bilingual topographical signs and reserved seats in Parliament to ensure that minority representatives participate in political life. The financial crisis, however, has resulted in the cutting of many support programmes. It should be mentioned that Lithuania did not fully comply with those developments. For example, minority languages are systematically eliminated by the central authorities from public use, and recent court cases have resulted in rulings that authorities must remove any sign identifying the name of a street in a non-Lithuanian language from private properties.

The recommendations include the Member States ratifying Protocol no. 12 to the Convention for the Protection of Human Rights and Fundamental Freedoms, the Framework Convention for the Protection of National Minorities and the European Charter for Regional or Minority Languages, fully implement the obligations under these Conventions, ensure a proper follow-up to the Committee of Ministers’ resolutions and take an active part in the No Hate Speech Campaign of the Council of Europe.

Lithuania did not ratify the Conventions mentioned above, except for the Framework Convention for the Protection of National Minorities which was ratified in 2000. But the Lithuanian government still fails to obey the standards of the protection of national minorities included in the Convention.

The European Foundation of Human Rights (EFHR), since its founding, has been working to inform society not only about the human rights situation in Lithuania, but also to raise awareness of human rights/discrimination in general. The EFHR has been working to promote those values and has as one of its main aims, the fight against hate crime, hate speech, discrimination and other forms of intolerance. Since 2011, EFHR has been campaigning, and so far almost 400 applications have been submitted to the public prosecutor’s office.

We strongly believe that to have a better Europe all member States of the Council of Europe must follow these recommendations. As Thorbjørn Jagland, Council of Europe Secretary General, mentioned on the report: “Together, we can put Europe back on the path of unity and cooperation, based on common values, standards and legal obligations”.