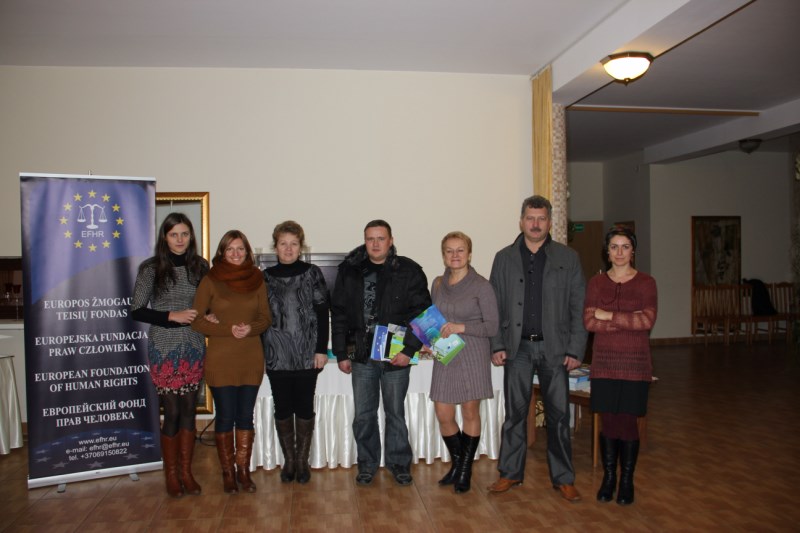 During the organizational meeting for children’s homes workers at EFHR’s office in November, the workers discussed what both they and the children need. A brief analysis showed that staff at children’s homes were not regularly trained, had an insufficient grounding in psychology and couldn’t regularly consult with a properly qualified specialist, some of the basic needs of a children’s home worker. Since an understanding of psychology could have an immense influence on a child’s psychological development, prevention of cognitive disorders, and solving psychological issues, it was decided that the training would be aimed at broadening the workers’ theoretical and practical knowledge in the field of psychology. From December 2013 to April 2014, they, along with members of the administrative staff, participated in a series of training seminars held twice a month both in Šalčininkai and Pabradė.

The training tackled such issues as job burnout and its prevention, as well as children’s psychological development and disorders, including intellectual, emotional, and behavioural ones, as well as childhood depression. The participants discussed the subjects of ADD and its diagnosis and therapy, learning disorders (dyslexia, dysgraphia, dyscalculia), basics of good communication, and other issues that children’s home workers face. The training included slide shows, discussions, examples of proper reactions to various hypothetical situations, practical tasks, role-play exercises, filling out self-analysis tests and surveys, and individual consultation. The participants had the opportunity to work both individually and in groups.

The participants claimed that the training had enabled them to recognize their strengths, weaknesses, and psychological barriers, and taught them how to prevent job burnout. At the end of each session, each of the participants was asked to evaluate the training. Most of them stated that they successfully used the acquired knowledge in their workplaces, and over 30% of them noticed positive changes in their relationships with children and with the community outside the orphanage. They were also glad to learn assertive communication techniques.

During the seminar, the participants discussed and described further needs of both themselves and the children in terms of psychological care. For example, the workers noticed that they still lacked skills to work with children with developmental, emotional, and behavioural disorders, aggressive children, rebellious teenagers, and children mourning the death of their relatives. Jolanta Masian confirmed that the workers need constant psychological support in order for them to help the children in their psychological development. It is also worth mentioning that some of the participants still do not believe that they can influence the development of the children and claim that they cannot change anything within the current system of care for children from dysfunctional families. Changing their approach will require a lot of work.

EFHR is glad that it can provide support for children’s homes in the form of training seminars on psychology within working for and educating on human rights. We hope that the relationship will continue and be beneficial for the children. If you want to support children’s homes, contact us or get in touch directly with the facilities themselves.