The future of constituency boundaries in Lithuania – will international standards be taken into consideration? 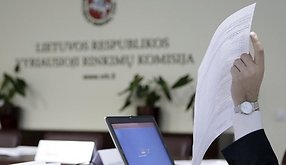 When celebrating Global Elections Day on the 5th of February, the Committee On State Administration And Local Authorities (Seimo Valstybės valdymo ir savivaldybių komitetas) and the Central Electoral Commission (CEC, Vyriausioji rinkimų komisija) organized a conference entitled “Electoral geography: from the analysis of voting behaviour to planning the next elections.” During the conference, the participants could share their scientific observations in the field of electoral history, use of modern technology in voting, announcing results and the use of scientific analysis of election results to organize upcoming elections.

One of the biggest problems which arose during the discussion was the need to revise the constituency boundaries after demographic changes in Lithuania. It is a pity that the representatives from the scientific field discussed the situation in Lithuania but neglected to mention the topic of Western Lithuanian areas, which are proving the most problematic. It would have taken a great deal of time to deal with this problem, which is why this particular topic wasn’t examined.

As we have written before, the CEC expressed its official stance on the matter of constituencies, also in Western Lithuania, in an adopted project from 2013, which received a negative assessment from the EFHR. The EFHR pointed out the weakest positions in the project. especially those that couldn’t be mechanically corrected, and we offered to cooperate with the CEC in order to solve the remaining problems.

During the discussion, the EFHR representative brought up the still relevant issue of changing the constituency boundaries in Western Lithuania, an issue that wasn’t touched upon during the conference. The Chairman of the Commission was asked to explain on what grounds the criteria of revision to constituency boundaries were chosen. The Chairman’s attention was directed to the Code of Good Practice in Electoral Matters, and especially to articles stating that: “in the areas, where constituency boundaries are redefined, actions must be carried out without detriment to national minorities and all the actions related with the redefinition of the boundaries must be co-ordinated with the representatives of national minorities at all times.” These articles are relevant particularly to the Vilnius and Salcininkai districts, as both are densely populated by national minorities (up to 89% of inhabitants in Salcininkai, and 75% in Vilnius). The EFHR noticed that when drafting the project of revision to constituency boundaries, the CEC had not taken into consideration political, national and other issues.

Vaigauskas, the Chairman of CEC, commented on the situation that he did not know a rule in the Code of Good Practice in Electoral Matters about discussing questions with national minorities representatives, and that the issue of revising the constituency boundaries was particularly difficult and it was almost impossible to find a solution which could satisfy everyone. There would always be people dissatisfied with their decisions and he hoped that society would understand this.

The official response of the Chairman of CEC is upsetting, since at the same time he emphasizes that the rules given in the Code of Good Practice in Electoral Matters are overshadowed by other ones, disrupting the goal of the Code, which is to optimise elections in such a way that the whole electorate and every person could use their voting rights and choose candidates representing their interests to serve in state institutions.

There seems to be no other way to make the CEC notice these circumstances than to take legal action, and this seems likely to happen in the future.