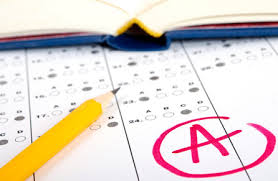 EFHR has analysed the Lithuanian exam results of secondary-school graduates from the years 2008-2013 from both Lithuanian schools and those of the national minorities. From the data of the National Education Centre, it follows that in the above-mentioned period of time, there was an increase in graduates who did not pass the exam. Nevertheless, one must consider the fact that this year’s results are better than those from last year.

The number of pupils that did not pass the Lithuanian exam between 2008-2015:

EFHR claims that the same syllabus and manner of teaching the Lithuanian language in the schools of minorities and in Lithuanian schools does not offer the same chances for appropriate preparation for the exam. This attitude is similar to the opinion of The Advisory Committee of the Council of Europe which emphasized that the changes, which have resulted in the normalized exam in Lithuanian and led to the withdrawal of exams in minority languages, has left the pupils of secondary schools at a definite disadvantage. Such a discriminatory attitude is in contradiction with the provisions of the general convention taken by Lithuania which refers to the possibility of learning in a national minority language. Lithuania is obliged to provide members of a minority group, within the educational system of course, proper conditions for learning the language of a national minority or for learning in such a language (Article 14).

We would like to remind everyone that since the introduction of the normalization of the exam in Lithuanian for secondary-school graduates from both Lithuanian schools and those of national minorities in 2013, there is the possibility to contest the results of the exam. In August 2014, two pupils from schools of national minorities who did not pass the exam in the official language made complaints to the Vilnius Regional Administrative Court (Vilniaus apygardos administracinis teismas) with the help of EFHR about the manner of the introduction of educational reform.

Currently, EFHR is looking for secondary-school graduates from this year who did not pass the normalized exam in Lithuanian. Such people are asked to contact the Foundation. We will provide you with free legal help.