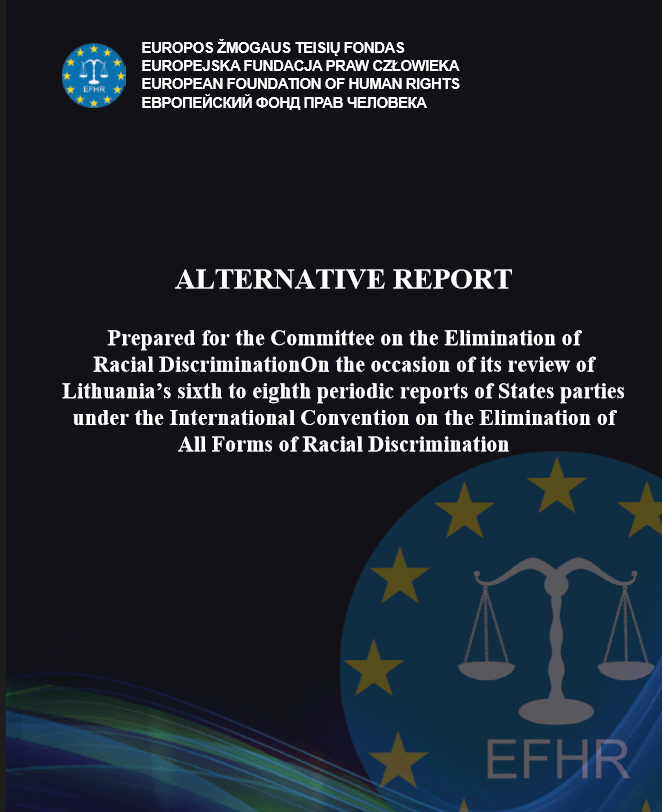 The European Foundation of Human Rights (EFHR) has submitted its Alternative Report for the Committee on the Elimination of Racial Discrimination (CERD).

This UN shadow report, considered at the 88th session of the Committee from 23 November to 11 December in Geneva, was written in response to CERD’s review of Lithuania’s sixth to eighth periodic reports of State parties under the International Convention on the Elimination of all Forms of Racial Discrimination (ICERD).

The aim of this report, which will be taken into account by the country rapporteur along with CERD members, is to provide CERD with additional information on the implementation of certain recommendations made by the Committee and to highlight the current debate on the rights of national minorities as well as their present-day level of protection in Lithuania.

Lithuania’s record on tackling racial discrimination faced close inspection by CERD on Friday 27 November during meetings that were broadcast live via the internet.

EFHR is pleased to be able to say that, since the last report presented in 2011, it has been noticed that the authorities in Lithuania have taken some measures to improve the quality of protection for national minorities. In particular, EFHR finds the renewal of the Department of National Minorities a positive step.

However, more still needs to be done, as we have set out to show in this report. Current issues include the lack of ratification of important international treaties, such as the European Charter for Regional or Minority Languages and Protocol No. 12 of the Convention for the Protection of Human Rights and Fundamental Freedoms.

The EFHR report was also mentioned by the European Network Against Racism national platform, consisting of a coalition of three organizations: The NGO Centre for Equality Advancement, the association Lithuanian Centre for Human Rights, and the NGO Roma Community Centre. You can read this alternative report here.

EFHR hopes that CERD takes our report and its recommendations into consideration. We are pleased to have had the opportunity to submit our findings and conclusions and sincerely hope that they can be of some benefit to CERD and go some way to help improve the situation in Lithuania.

Summary of the EFHR Alternative Report for the Committee on the Elimination of Racial Discrimination (CERD):