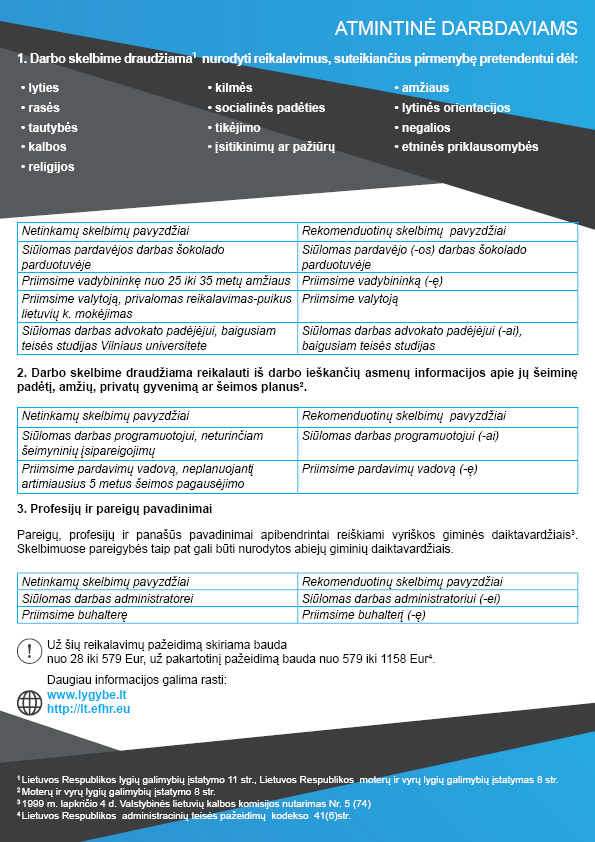 In 2015, the European Foundation of Human Rights (EFHR), together with the Service of the Spokesman for Equal Opportunities (furtherly referred to as: Service), prepared a guide through the non-discriminating job offers. This hands-on document is intended for employers and prompts them on how to rightly formulate job offers, without infringing the Act for the equal treatment of women and men and the Act for equal treatment. Despite the steps to raise the awareness of both employers and employees, taken by the EFHR and the Service, it still happens that some job offers qualify age, sex, or marital status as the criteria for employment.

Complaints submitted by EFHR were motioned by the Service as cases reported out of own initiative. Spokesperson has established that all of the published offers are incompatible with the Act for equal treatment as they give priority to people of certain age. These offers may work towards limiting the possibilities of those who belong to different age groups. Some of those offers are also infringing the Act for the equal treatment of women and men. Managers of all companies that published these ads and recognized their error obliged themselves to abide by the Act for equal treatment in the future. They were also forewarned about the violations that they committed.

Information regarding the age, posted on www.darbo.lt, has been justified by one of the companies. Its representative said that the shop is selling woman lingerie – therefore, the employee who was posting the offer online decided to add the age requirement to the announcement. However, the contents of the offer were not agreed upon with the administration of the company and the employee sincerely regrets her deed and obliges herself to abide by the law in the future. Another company explained that the fragment about the preferred age of the employee sneaked in to the offer as a result of a human error. After discovering the infringement, the announcement has been removed from the web.

Another age criterion in a job offer was published by the company who was looking for an auxiliary employee in a printing office, younger than 35. The company has explained that the work place that was looking for a new employee applies modern technologies, which are easier to master for younger people. Company’s director stated that he regrets the misunderstanding and that he realizes that such an offer is in contradiction with the law.

Discriminative offers that may limit the possibilities of people who belong to another demographic group have been recognized by the Court of Justice of the European Union (furtherly referred to as: Court) in the case of Feryn NV company. In this case, the Court has stated that the employer who states that he will not hire employees of a given ethnic or racial background commits an act of direct discrimination in the light of the Directive of Council 2000/43/WE from the 29th of June 2000, implementing a regulation for the equal treatment of people, irrespective of their ethnical or racial background. The regulation was saying that these types of statements may seriously impede the candidates’ willfulness, what in turn will hinder them in entering the job market. The Court explains that public announcements saying that people of a given background will not be hired are – in light of the article 8 paragraph 1 of the Directive 200/43 – enough to accuse such employer of direct discrimination in the hiring policy.

In the case of discriminative job offers, the obligation to show that the rule for equal treatment has not been violated always lies on the employing side. Employer has a possibility to do so by proving that the actual company’s policy is not in agreement with the announcement that he has published. State courts should assess the charges and their circumstances, together with evaluating if the evidences provided by the employer are sufficient for him to be acquitted. What is more, article 15 of the Directive 2000/43 foresees that even if nobody was harmed through the infringement of the law passed on the basis of the before mentioned directive, the imposed sanctions must be efficient, proportional, and repelling.