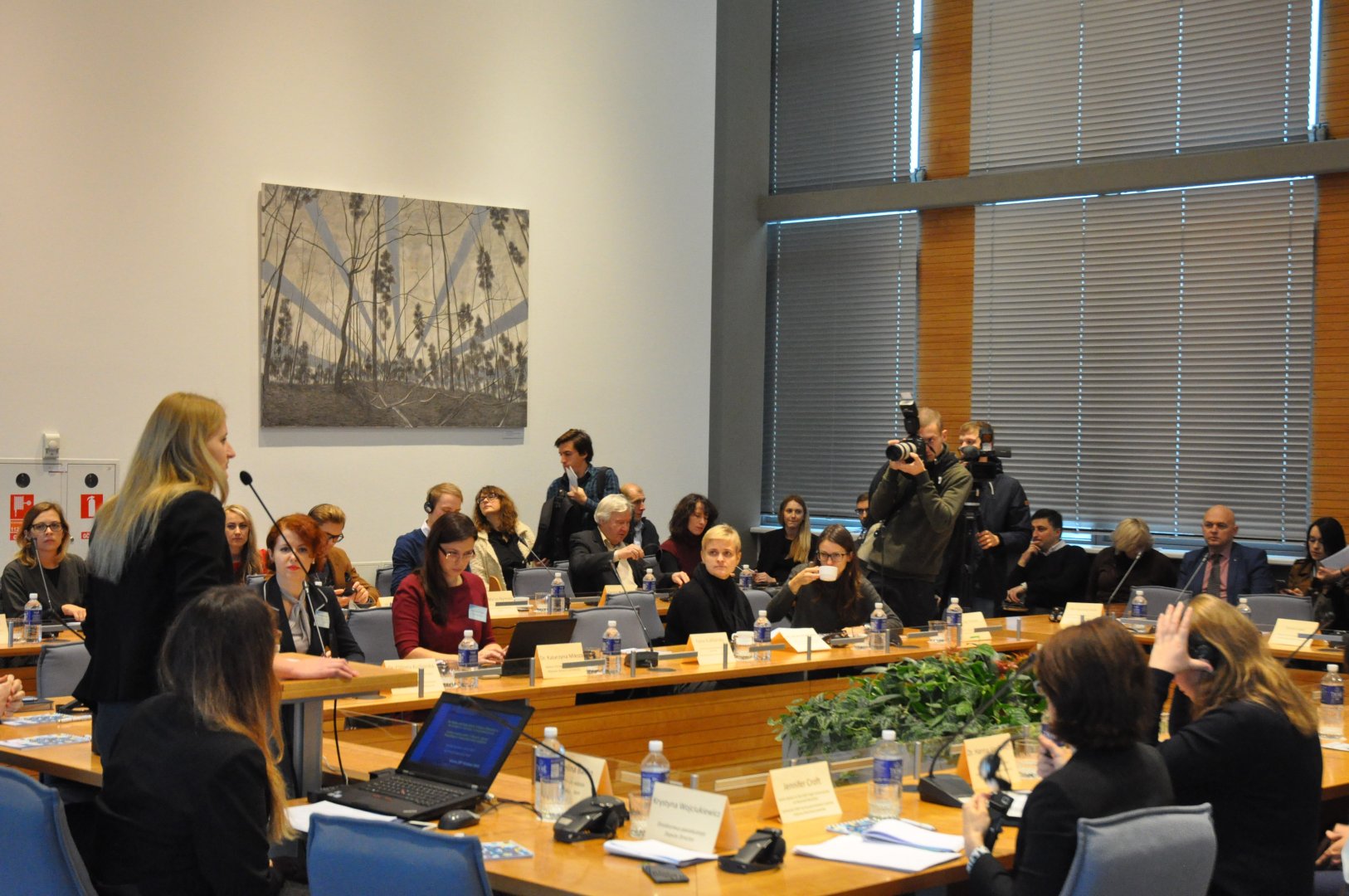 On Friday 28th of October, the European Foundation of Human Rights (EFHR) gathered participants to its annual conference on national minorities. The title of the conference was “The Rights and Expectations of National Minorities in the Context of Lithuanian and International Law”. The event took place in Vilnius municipality building at Konstitucijos ave. 3

The conference day was opened by the mayor of Vilnius, Remigijus Šimašius. In his opening speech, the mayor provided information on the initiatives of Vilnius city municipality directed towards the national minorities (services for the clients in four languages, the news in five languages, opening of foreign language street art in Vilnius). Mr Šimašius’ speech was followed by a talk by Krystyna Wojciukiewicz, the deputy director of the EFHR. Ms Wojciukiewicz gave a short introduction on the EFHR’s activities; such as legal counselling, campaigning against hate speech and discrimination. The next speaker was Artur Zapolski representing the Department of National Minorities in the Republic of Lithuania. He presented the activities that the 2015 founded department has launched to ensure the rights of national minorities. Mr Zapolski emphasized that successful implementation of minority rights is a multilateral process during which all the parties must be heard. The fourth speaker of the first session was Jennifer Croft, a senior adviser for the OSCE High Commissioner on National Minorities. The topic of her speech was “Minority rights in inter-State relations”. Ms Croft concluded that states are obliged to facilitate social cohesion within their borders and that implementation of minority rights serves for creating this social cohesion. This is why states should follow international guidelines on minority rights, regardless how neighbouring states fulfil their international obligations. The last speaker of the first session was Hanna Vasilevich from the European Centre for Minority Issues. Her presentation was based on comparison of governmental approaches in Czech Republic, Poland and Germany on providing public signs in minority languages. Ms Vasilevich emphasized that having public signs in minority language is an important symbolic expression of minority’s presence in area.

The second session was started by Grigorijus Potašenko, an academic director of the Centre for Stateless Cultures at the Faculty of History of Vilnius University. He delivered a speech on multiculturalism in Lithuania. Mr Potašenko pointed out that implementation of policies for multiculturalism have not been sufficient for demands of multicultural society. Mr Potašenko concluded that two resilient believes are still present in the mental level within Eastern European countries: (1) a believe that minorities are disloyal for the country and (2) a believe that a state is strong if its minorities are weak. Mr Potašenko’s presentation was followed by a presentation by the director of the Labour Market Research Institute Bogusław Grużewski. He provided information on socio-economic situation of the areas in Lithuania which are densely inhabited by Polish and Russian minorities. In short, Mr. Grużewski’s analysis demonstrated that these areas, on average, tend to be in a worse socio-economic situation. The third speaker of the second session was Faina Kukliansky, the Chairperson of The Jewish Community of Lithuania. She brought up some of the concerns facing the Lithuanian Jewish Community. Ms Kukliansky acknowledged that concerns of the Jewish minority differs from the concerns of bigger minority groups in Lithuania. Among other concerns, Jewish minority struggles to find sufficient funding to preserve their cultural heritage. Dr. Łukasz Wardyn spoke about participation of minorities in Lithuanian parliamentary elections. He presented three issues that make the effective participation of minorities in elections more difficult: not-translated ballot papers, thresholds in elections and gerrymandering against minorities’ interests. He presented cases from Lithuania, clearly indicating that gerrymandering against minorities’ interests in Lithuania did take place.

The third session started with a presentation by Elżbieta Kuzborska, a Scientific Secretary of the Association of Polish Academics in Lithuania. Ms Kuzborska gave an overview on the rights to education in minority languages in the European context. She emphasized that, according to studies conducted by UNESCO and the World Bank, providing education in mother tongue in as high grade as possible reduces dropout rates, strengthens the minority community and also improves results in learning national languages. Therefore, it is a cost-efficient way to integrate minorities in the society. Two of the last presentations were dealing with spelling of names and surnames in mother tongue. At first, associated professor from the Mykolas Romeris University Katarzyna Miksza pointed out that a personal name is crucial for one’s identity, as it individualizes the person. She underlined that according to international standards, names should be written in graphically correct way when the alphabetical system is the same. Assistant Advocate Ewelina Baliko continued this topic with a more practical approach. She presented several cases brought up in Lithuanian courts concerning rights to use letters “x” and “z” in official documents. Ms Baliko had also invited a plaintiff to talk about his personal experience.

It should be mentioned that the topics were discussed to some extent immediately after each presentation. Nonetheless, the last half an hour of the conference was reserved for more profound intercourse. The discussion intensified especially when the Lithuanian policies on education and name spelling were addressed.

The EFHR considers that growing interest in discussions concerning minorities’ rights in Lithuania is a truly welcomed advancement. The EFHR will continue its work on facilitating this important dialog. The EFHR wants to thank all the lecturers and participants. We would also like to thank Vilnius municipality for providing the conference room. 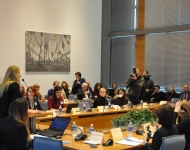 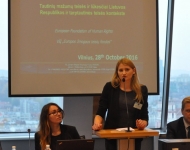 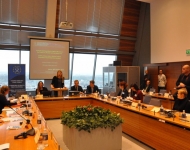 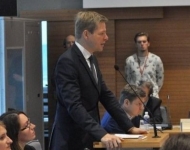 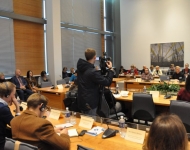 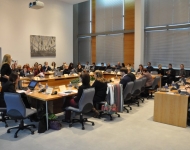 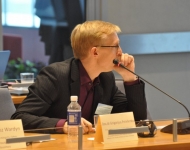 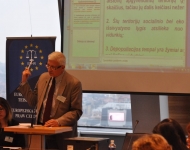 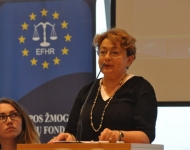 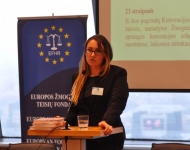 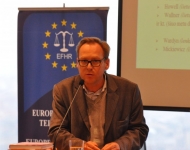 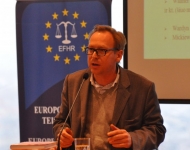 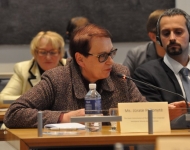 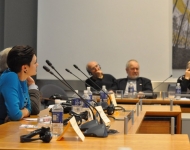 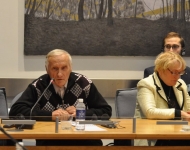 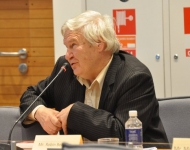 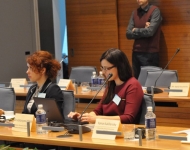 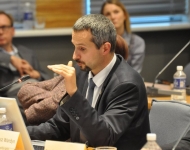 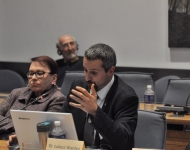 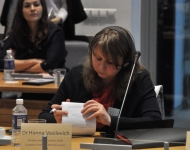 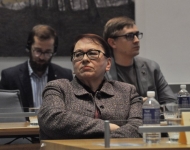 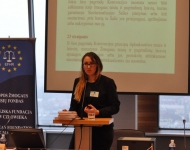