Statement of the European Foundation of Human Rights 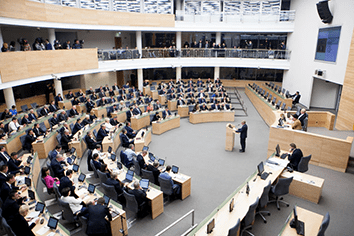 The European Foundation of Human Rights (EFHR) critically appraises the bill registered in the Parliament of the Republic of Lithuania on July 24th 2018. The bill amending Art. 30 of the Education Act No. XIIIP-2413 by representatives of the Homeland Union – Lithuanian Christian Democrats: Laurynas Kasčiūnas, Agnė Bilotaitė, and Audronius Ažubalis. The amendment that is to enter into force at the beginning of 2019 is the introduction of teaching in Lithuanian language at schools of national minorities in 2023, with at least 60% of subjects in the state language and 40% in the language of national minorities.

In the justification to the project, the authors refer to a need to “strengthen the integration of representatives of minorities and representatives of national communities living in Lithuania into the social, political and economic life of the state”. However, understanding the meaning of the concept “integration of national minorities” has never been a strong side of the Lithuanian conservative party, which is why the European Foundation of Human Rights would like to recall that “integration of minorities” in the sense of European protection standards means respect for minority educational rights and their needs.

The authors of the amendments did not support the introduction of the proposed changes by any research referring directly to the interested parties, such as school communities, students or parents. They point out that the amendments are to contribute to the “integration of minorities in the labour market”, which is a hypocrisy, bearing in mind that the minority education system changes were introduced by them in 2011 and have reduced the chances of graduates from minority schools to take up free studies at state universities.

EFHR assesses that the proposed amendments are yet another attempt by the conservative party to destroy the education of national minorities in Lithuania, is discriminatory against students of Lithuanian schools who study in their native language, and are aimed at inciting national feuds. The Foundation reminds that the studies carried out by the World Bank, UNICEF and UNESCO indicate that teaching in the native language contributes to better student performance, strengthens its sense of identity and sense of value, and most importantly – leads to a better knowledge of not only the native language but also the state language.

The European Foundation of Human Rights sees the proposed amendments to the Education Act as harmful, aimed at worsening the relationship between the majority in the country and representatives of minorities, as well as indirectly worsening the relations between Poland and Lithuania. In our opinion, this is a provocation of the representatives of the Lithuanian conservative party, aimed at inciting national feud in the state. EFHR is calling for no further work on amendments on No. XIIIP-2413.