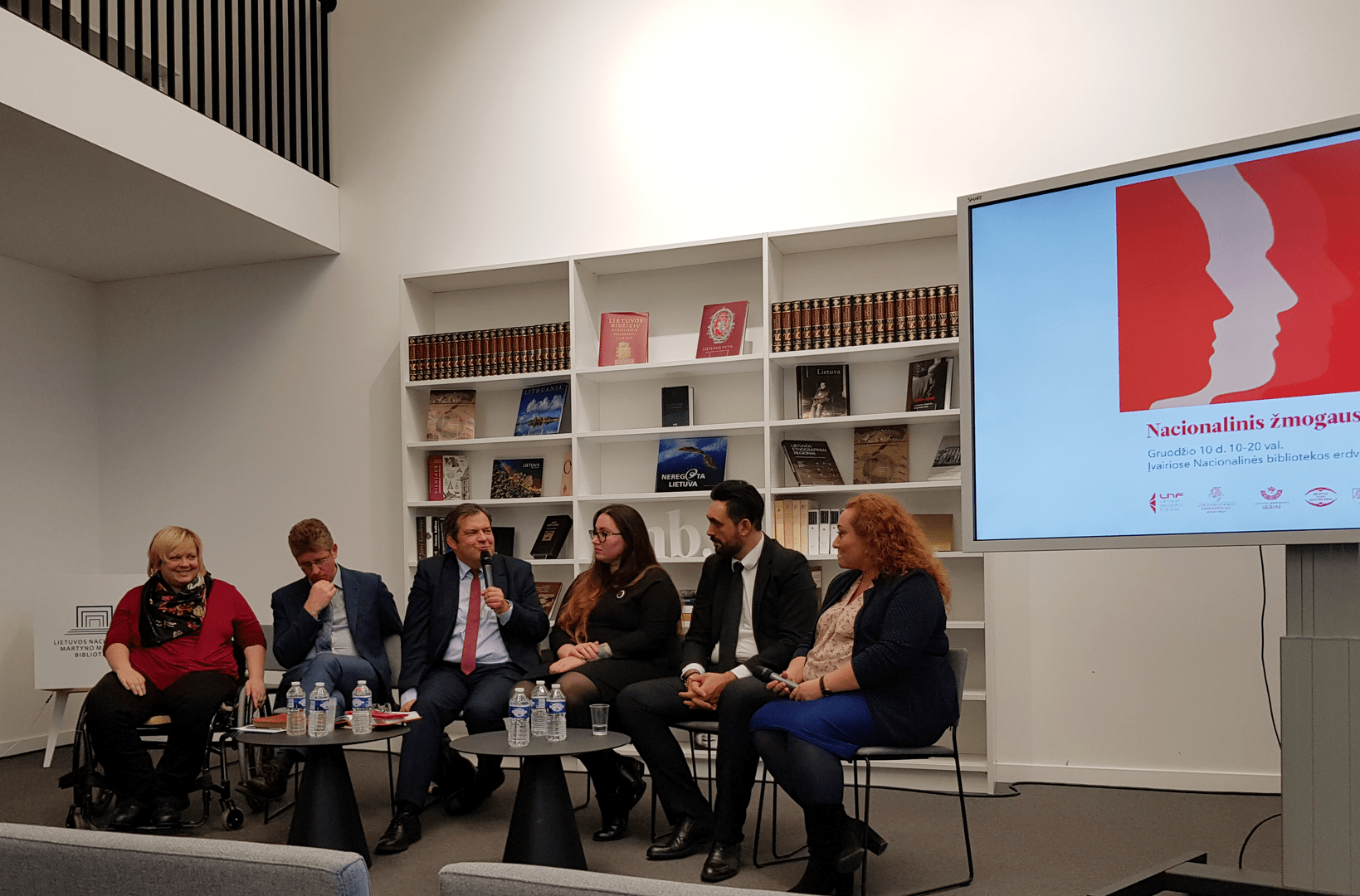 On December 10th of 2018, marking the International Human Rights Day, the National Forum on Human Rights (NFHR) was held in Vilnius for the first time. This year discussions focused on the theme of opportunities. During the Forum specialists of various fields disscused the situation of human rights in Lithuania, also welcomed the public to join the discussions on what can be done to ensure that Lithuania provides appropriate environment for everyone – regardless of nationality, race, faith, gender, social status, beliefs or views.

EFHR representative, attorney‘s assistant Evelina Dobrovolska joined the NFHR discussion called „The rights of national minorities in Lithuania: how to establish standards?“ The event was also attended by Oleg Yerofeyev, Editor in Chief at Ru.delfi.lt, Ishtvan Kvik, Chairman of the Lithuanian Roma Association, Vaiva Poškaitė-Tomaševič, Head of the Roma Association of the Baltic Region and Vaiva Vėželytė-Pokladova, representative of The Department of National Minorities under the Government of the Republic of Lithuania. The discussion was moderated by assoc. prof. Dr. Andžej Pukšto (Vytautas Magnus University)

Evelina Dobrovolska started the discussion by noting that Lithuania ratified the Framework Convention for the Protection of National Minorities on 17th February 2000, however the Law on National Minorities expired in 2010 and, despite new projects, the Seimas of the Republic of Lithuania has not yet adopted the new law. Therefore, currently the greatest unresolved issues are the preservation of indentity of national minorities in the public sphere – bilingual street signs, original spelling of personal names, the use of the language of national minorities.

Speaking about Russian national minority, Oleg Yerofeyev mentioned major educational problems – a decrease in the number of pupils in national minority schools, a lack of suitable textbooks and skilled teachers. All the speakers agreed that teachers in Lithuania are not being trained to teach Lithuanian language as a foreign language, therefore, children of national minorities begin to learn at an uneven level.

Vaiva Poškaitė-Tomaševič  and Ishtvan Kvik shared the challenges faced by the Roma community, including education and the preservation of their culture, as well as youth inclusion and women‘s issues. Vaiva also pointed out that not all Lithuanians are aware that during the Second World War not only the Jewish but also the Roma Holocaust was executed. The International Roma Holocaust Remembrance Day is commemorated on the 2nd of August, although it is still not officially acknowledged in Lithuania as memorable day. Finally, Ishtvan Kvik wished for everyone less hatred and more political decisions for each nation.

The EFHR would like to thank the organizing committee of the National Forum on Human Rights for arranging such a fruitful and interesting event to commemorate the Human Rights Day.