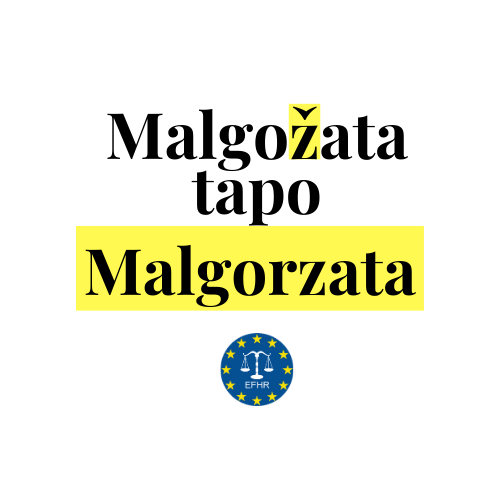 Article 2.20 part 1 of the Civil Code of Lithuania establishes that every person has the right to a name. Also, it includes the right to have a surname, first name (s) and a pseudonym.  However, the existing legal framework is not sufficient to meet the rights and needs of the individuals. This conclusion was reached on the 23rd of October 2019, when Vilnius District Court was examining Malgožata Runevič-Wardyn’s case regarding her name change. Malgožata is a Lithuanian citizen of Polish descent, that in 2007 married a Polish national Łukasz Paweł Wardyn.

The family has been fighting for the original spelling of their names since 2008. The cases have even reached the Court of Justice of the European Union (CJEU), which has declared that a person’s name and surname is a part of the individual’s identity and private life. These rights are protected by Article 7 of the Charter of Fundamental Rights of the European Union (‘the Charter’) and Article 8 of the Convention for the Protection of Human Rights and Fundamental Freedoms (‘the Convention’).  Although Article 7 of the Charter is not explicitly referencing a person’s name and surname, it is still relevant as it is a part of an individual’s identity, private and family life (CJEU; 12 May 2011, Runevič-Vardyn and Wardyn, No C-391/09). The Court of Justice has noted that the spelling of foreign names may in some cases affect the implementation of Article 21 of the Treaty on the Functioning of the European Union that establishes the free movement. Refusing to change the name of a national of a Member State and to recognize the name acquired in another Member State may be considered to be a restriction of freedoms recognized in the Article, as such person could be subjected to serious administrative, professional or personal inconvenience  (CJEU; 02 June 2016 by Nabiel Peter Bogendorff von Wolffersdorff, No C-438/14).

On the 7th of November 2016, Vilnius City District Court decided to change the applicant’s surname to Wardyn. This decision became effective, and the surname Wardyn was included in all Lithuanian registers without any administrative inconveniences or additional costs for civil servants. Since the family has three children, the applicants were also forced to apply to the Lithuanian courts for each of their surnames because, even if the Civil Registration Department were obliged to record the mother’s original name, such decision would be individual and not automatically applicable to other family members.

While investigating the case regarding the spelling of the name ‘Malgorzata’, the court raised a question of whether a change of one letter meant a change of a name. The court relied on the United Nations Human Rights Committee experience with the case were applicant Leonids Raihmans requested a change of name and surname to the original form of ‘Leonid Raihman’. On the 28th of October, it was recognized that infringement occurred in Raihman vs Latvia (Notice No 1621/2007) case, as according to Article 17 of the International Covenant on Civil and Political Rights forceful name change is an unlawful interference with the privacy of a person and a violation of human rights. Even a change of one letter against the will of the individual shall be considered as a change of personal name.

Malgorzata’s case is of particular importance to the national minorities living in Lithuania.  Article 3 of the Convention for the Protection of National Minorities establishes that every person belonging to a national minority has a right to choose if they want to be treated as a minority and to not be disadvantaged by his or her choice of exercising the rights inherent in such decision. Therefore, under Article 11 of the Convention on National Minorities, the person has the right to use his name in the minority language

This is the first case in Lithuania where the court recognized the right to an original name form for a Lithuanian citizen of Polish descent. However, it is not a complete novelty for the Lithuanian legal system. Even in 1928 Article 24 of the Surnames Act, proclaimed that ‘a non-Lithuanian surname should be spelled according to the Lithuanian language and spelling rules, but it can also be spelled in the language of the holder if he so wishes and if the alphabet is Latin”.  Unfortunately, Acts that currently determine the spelling of names establish different rules. On the 28th of March 1991, State Commission of the Lithuanian Language decided that foreign names that are used for the passport of a Citizen of the Republic of Lithuania should be rewritten in the Lithuanian language. Polish characters were required to be changed to their Lithuanian counterparts, such as ‘rz’ turned to ‘ž’.

However, the State Commission of the Lithuanian Language indicates that exceptions could be made for citizens of the Republic of Lithuania who are married to foreigners, as well as the names of children of such spouses, the document, unfortunately, does not apply to ethnic minorities.  It is considered that such discriminatory institutional treatment, where one group is allowed and the other denied the right to the original spelling of personal names, does not guarantee a respectful attitude of the state towards respecting human rights.

Attorney’s assistant Evelina Dobrovolska pointed out that for Malgorzata this was not the last case. She has a double surname, which includes both her maiden name and that of her spouse. The maiden name remains Lithuanian, which, of course, creates an absurd situation where a part of the surname corresponds to the original spelling of national minorities while another part is Lithuanian.

Although over seventy cases concerning the original spelling of personal names have been examined by Lithuanian courts today, the draft law on the spelling of names and surnames will not be considered at the autumn session of the Parliament of the Republic of Lithuania. The European Human Rights Fund (EFHR), which co-ordinates similar cases, sees a tendency for such problems to be solved exclusively by the courts, thus wasting the state budget rather than adopting legislation to deal with them administratively.