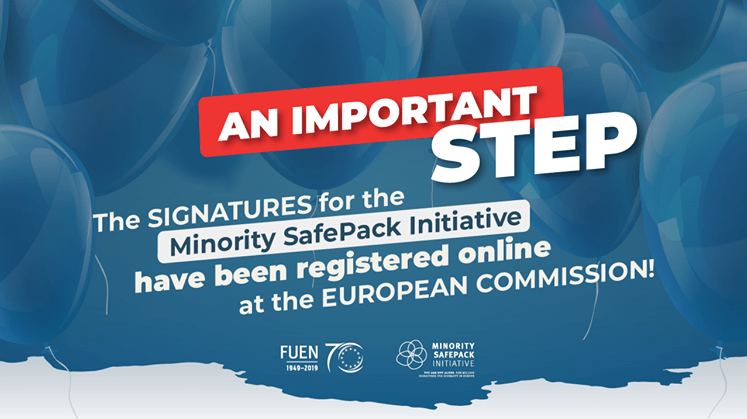 The registration of Minority SafePack Initiative has been completed and the signatures forwarded to the European Commission.

Minority SafePack was launched in early 2017 by the Federal Union of European Nationalities (FUEN). The initiative calls upon the European Union to introduce legislation that would improve the protection and well-being of persons belonging to national and linguistic minorities. At the same time, it aims to strengthen the cultural and linguistic diversity of the EU. During a one-year campaign, the initiative has collected 1,128,385 signatures from its supporters, significantly surpassing the threshold required for European Citizens’ Initiative projects. 18,990 signatures were registered by Lithuanians.

The signatures have been now validated by authorities of all EU Member States, which allows the representatives of FUEN to meet in person with the EU Commissioners and Directors General in order to present the legislative proposals prepared by the FUEN’s team of experts. Henceforth, the European Commission will have six months to formulate its position and decide on the legislative process. During this period, a public debate involving all interested parties will be held at the European Parliament. Its results will have an influence on the final decision made by the European Commission.

The European Foundation of Human Rights (EFHR) has been involved in the process of collecting signatures for the initiative back in 2017-2018. We continue to support the Minority SafePack Initiative and hope for the best outcomes of the deliberations taking place in Brussels and Strasbourg.