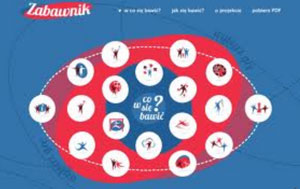 The European Foundation of Human Rights would like to encourage everyone to use The Plaything. It’s a website and a publication for children, that includes a collection of 150 ideas, scenarios for games and plays for children, from rhymes, through board games, to theatre. The content has been made available on the basis of Creative Commons Attribution license, on the conditions 3.0, which means that it can be freely used, published and shared. The Plaything was created within the “We listen to Poland” project, by Modern Poland Foundation. The task was realised by request of Senate’s office, and belongs to the programme of taking care of Poles and Polish community abroad in 2011. How? With an imagination and spirit. Creatively. Happily- that’s most important in playing. And remembering that…

The difference between a game and a play is that a game has some traces of competition, someone wins, someone loses, but in a play- everyone wins. Most of the games can be made into plays- and the other way around. It is worth doing, especially if it turns out that the same participants lose all the time. Let’s give up competing then, for the sake of pure fun.

Being spontaneous makes playing livelier, but if we plan a social party, let’s think about preparing the things that we’ll need. You can’t make a jump rope competition without enough jumping ropes.

Games and plays have rules that should be known to all participants. We never change the rules in the middle of a game, unless we had forgotten something- then, of course, we correct the mistake and start the game over. It is good to make a deal about when the play ends in advance: when there is only one person left, after ten minutes, after scoring a given number of points etc.

It’s best when there is one person who directs and leads the plays, and who, if there is a need, is a judge.

Often you have to settle a dispute, decide who wins, and show the order. You do it by numbering rhymes of by drawing lots. The telling of the rhymes and drawing lots can be fun themselves. We know various ways, from the simple “head or tales”or “the longest match” to the favourite game of the Winnie the Pooh’s team, “Rock, paper, scissors”.

For playing (or practicing the plays), let’s use all the moments that seem dull, boring and unnecessary. The time will pass faster, the moods will brighten up. And a good mood is a priceless thing! Albert Einstein believed that it’s everyone’s most precious thing.

Let’s collect the plays and games. A collection like this will be a real reassure for years. On each occasion, let’s ask our parents, grandparents and maybe even grand-grandparents, what they played in. They will surprise us with their stories.

Playing does not know any age limits, so we can play with younger siblings and with grandparents. Let’s start now!

The Plaything is also available as a digital
file that can be printed out as a handy book.