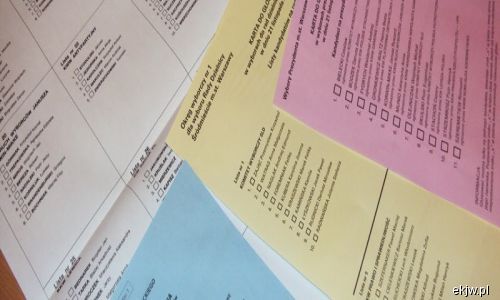 At the end of August 2013, a bill concerning the amendment of the Article 58 – the Article of Act on Parliamentary Elections was introduced in the Lithuanian Parliament. It added to the provision of the above mentioned Article the statement that in constituencies where their inhabitants – the citizens of the Republic of Lithuania belonging to national minorities – represent no less than 10%, the voting cards shall be submitted in the language of this national minority as well (as the translation of voting cardsin the official language). The Parliament in the vote of 10 October, approved the motion of the Legal Committee in which it was stated among others that the above mentioned proposal may not comply with Article 14 of the Constitution of the Republic of Lithuania which stipulates that the Lithuanian is the official language of Lithuania. In addition, the committee paid attention to the fact that this kind of regulation could break the principle of equality of rights towards these citizens, the representatives of national minorities who represent less than 10% of the inhabitants of the electoral constituency.

The European Foundation of Human Rights (EFHR) wishes to raise the attention to the fact that in April 2003, one month before the vote in the matter of the accession of the country to the EU, the Lithuanian legislator introduced a possibility of submitting the translations of voting cards in the language of national minorities (the relevant provision in question restricted such a possibility to the votes in referenda in the matter of the accession of Lithuania to international organisations). In 2006, the above mentioned regulation was considered as unconstitutional by the Constitutional Court (SK) of Lithuania.

The Constitutional Court stated among others that the citizens (the representatives of national minorities) who did not use the official language in a level satisfactory enough to participate in the vote, should not be encouraged in an artificial way to take part in the decision-making process of national rank.

This substantiation is very surprising. It is contradictory to all principles of the democratic state of law that guarantees equal rights to every citizen. Thus, the decision of the Constitutional Court qualifies the citizens not knowing the Lithuanian language as a second category, creating in this way the precedent not encountered in democratic countries.

The EFHR wishes to emphasize that in the democratic state of law, the electoral process shall be open and accessible to all citizens. The authorities shall encourage the citizens to participate in the public life of the state and shall not restrict their possibilities in this matter. In turn, depriving people (the representatives of national minorities) of their political rights because of their insufficient knowledge of the official language, may be perceived as discrimination on the grounds of a language, which is prohibited by the Lithuanian Constitution.

In their most recent report, the OSCE Office for the Democratic Institutions and Human Rights (an institution of the Organisation for Security and Cooperation in Europe) underlined that in locations densely inhabited by the representatives of minorities, the state should consider making the electoral information  available  (including voting cards) in their national minority language as well.  In the point of view of this organisation, such a solution will help overcome the linguistic barrier because of which the minorities could have problems while voting.

In the opinion of the EFHR, depriving the representatives of minorities of the right to vote because of their insufficient command of the official language is contradictory to the guarantees of the effective participation of citizens in the decision-making process in the democratic state.