An invitation to the screening of documentary films! 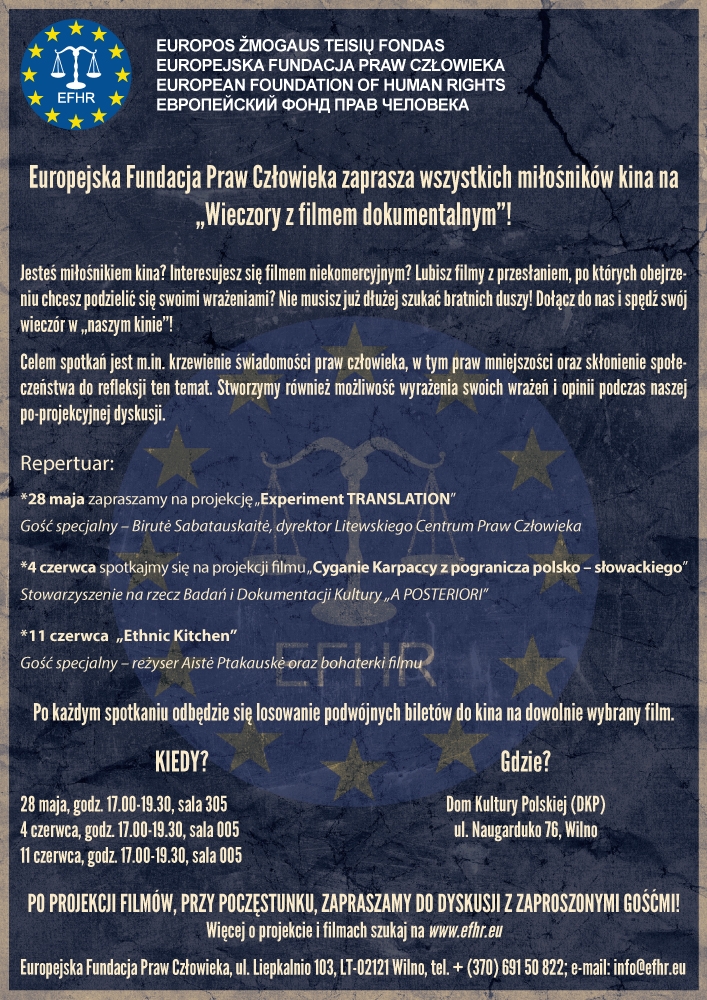 The European Foundation of Human Rights (EFHR) invites all cinema fans to a screening of three films: “Carpathian Roma from the Poland-Slovakia Borderland”, “Experiment Translation” and “Ethnic Kitchen.”

The aim of the meetings under the project “Evenings with Documentary Films” is, among other things, to cultivate awareness of human rights, including the rights of minorities, and prompt society to reflect on this subject. We will also give guests an opportunity to express their impressions and opinions during our after-screening discussions. Do not hesitate to join in and share your opinions with us!

The screening of the films and discussions, accompanied by refreshments, will take place at Dom Kultury Polskiej (DKP) situated on Naugarduko 76 in Vilnius on the following dates:

Admission to the screenings and discussions is free! After each meeting there will be a chance to win a pair of cinema tickets.

A short social commercial “Experiment Translation” depicts an actual social experiment whose aim is to make a wide audience aware of how people of different ages reacted to a hateful message which a young African American received. Do you want to see what happened? Join us! The film has been produced by the Lithuanian Centre for Human Rights.

“Carpathian Roma from the Poland-Slovakia Borderland” is an educational documentary film which shows the history and present times of the Roma from Bergitka Roma ethnic group that inhabits the regions of Sądecczyzna, Podhale, and Stara Lubowla in Slovakia. We invite you to meet this extraordinary community. The film has been produced by the Association for Research and Culture Documentation “A Posteriori”.

“Ethnic Kitchen” presents the story of four women of non-Lithuanian origin, who have been living in Lithuania for many years. It is a specific answer to the question: “Can Lithuania be your promised land?” The film “Ethnic Kitchen” is a project created by Aistė Ptakauskaitė.

Spend your evening with us!