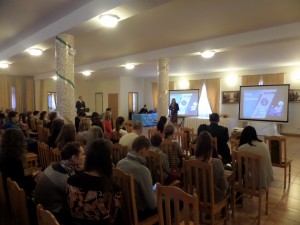 On the 19th December, in the hall of Runmis Hotel (Liepkalnio 103 Street, Vilnius) a ceremonial gala on the occasion of the finale of the third edition of the “Europeans, Poles, Citizens” project took place. The gala was attended by the participants of the project, teachers, guests and people who took part in the art contest “Human rights in the lives of children”.

The aim of this year’s “Europeans, Poles, Citizens” project was to introduce a modern Civics teaching programme in Polish in Lithuanian schools. Owing to weekly radio broadcasts on “Znad Wilii” radio and articles published in the Friday issue of the “Kurier Wileński” newspaper, the contestants were able to broaden their knowledge on eight topics: social activity, the authorities, the European Union, international organizations, the problems of the modern world, nation and country, human rights and Lithuanian law.

This year, the exam was taken by 234 students, and 125 of these students passed the exam.

During the final gala the winners of the contest were announced and prizes were awarded. The first place was taken by Agata Kurłowicz from Władysław Syrokomla High School, Waldemar Baran from Juliusz Słowacki Junior High School in Bezdonys came second, and third place was awarded to Dorota Stankiewicz from Czesław Miłosz School in Pakiena.

Distinctions were granted to: Greta Duden from Stanisław Moniuszko Junior High School in Kowalczuki, Kamila Tomaszewska from Joachim Lelewel High School, Dorota Sokołowska and Justyna Michałkiewicz from Władysław Syrokomla High School, Brygida Zajankowska from Šumskas Primary School, Anna Taraszkiewicz from Władysław Syrokomla High School and Patrycja Bielkiewicz from Adam Mickiewicz Junior High School. The main prizes included: a laptop, a tablet and a camera. The highly-commended participants received other prizes and all of the students who passed the exam, along with their teachers, were given diplomas.

For the students from grades 5-8 EFHR organized a competition “Human rights in the lives of children”, with the winners being awarded a tablet, an iPod and a video games console. Moreover, the participants who were highly-commended received small gifts and educational materials. The task of the contestants was to present a chosen aspect of the rights of children using imagination and creativity.

Distinctions were given to: Bernard Rynkiewicz from Vilnius School in Lazdynai and Emil Baranowski from Michał Baliński Junior High School in  Jašiūnai.

The gala provided a wondeful opportunity to present EFHR’s work and achievements over the last five years. After the prizes were awarded, guests were invited to have a piece of cake – which was especially baked for the occasion – or some other delicious snacks.

We would like to thank everyone for their participation in the projects. We would also like to encourage you to take part in the next edition of the “Europeans, Poles, Citizens” project next year as well as in other initiatives organized by EFHR. Information about the project is available here.