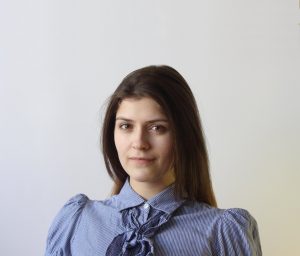 Eglė Beinorytė is a first-year student of the study programme combining law and management at the Michał Römer University and Université Montesquieu Bordeaux 4 in France. Eglė is interested in the European Union, as well as in the international and criminal law. In April this year she began a six-week traineeship in the European Foundation of Human Rights (EFHR).

Eglė was born in Telšiai, the capital city of Samogitia. Having finished her school, she moved to Vilnius. After graduation from studies, she is going to stay in Lithuania’s capital city, although she does not reject the possibility of trying her luck abroad. For certain, however, she would like to work in her profession in Brussels. During her studies, she completed a traineeship at the Persecution Department of the Circuit Prosecutor’s Office in Vilnius, i.e. at the department of very serious crimes, where she acquainted herself with the character of a prosecutor’s work.

Eglė has been traveling the world for years already. Participating in the folklore ensemble “Čiučiuruks” since her childhood, she has been able to experience new cultures and their diversity, as well as to become tolerant and respectful of ethnic, cultural, and social differences. In 2009 she got involved in voluntary service in various international organisations. In the same year, she took up preparing and implementing a project financed by the European Union in Lithuania. After this bold start of being a volunteer, still in 2009 she went to the Czech Republic under her first youth exchange project. Eglė is not planning to stop – in the spring last year she went to Turkey under the tenth project already, during which she was one of the group leaders.

The EFHR traineeship in Vilnius is a great opportunity to put into practise the theoretical knowledge gained during studies, see the problems existing in the field of human rights protection, improve social engagement, and come to respect rights of various social groups regardless of their background, social status, beliefs, and gender.

In her spare time, Eglė likes long walks in the park, reading books, as well as attending performances, ballet, and concerts.