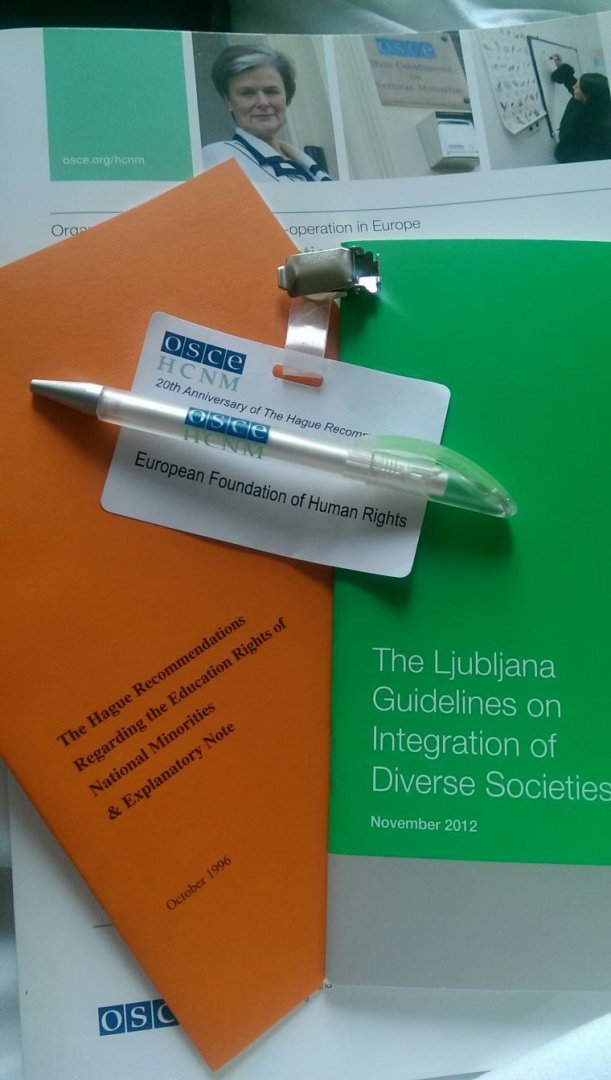 On the 20th and 21st April, the High Commissioner for National Minorities of the Organisation for Security and Cooperation in Europe organized a conference dedicated to the 20th anniversary of the Hague recommendations on the educational rights of national minorities.

A month ago, during a meeting with representatives of the High Commissioner in Vilnius, the European Foundation of Human Rights (EFHR) received a personal invitation to the conference. EFHR was represented by legal assistant Ewelina Baliko.

During the conference, experts from the field of education, the NGO sector and international organizations presented current issues of national minorities in education, system reform and examples of implementation of the Hague recommendations.

During the group work session devoted to thinking about how to reform the education sector as well as preserve diversity, the examples of Moldova and Slovakia were highlighted. This was followed by an in-depth discussion on the education system in Finland, which is considered an example of good practice. In Finland the decision-making process engages the local community, including parents as well as the representatives of national minorities.

The representative of the Ministry of Education and Science of Lithuania explained education system reform by drawing attention to the steps that were undertaken: a standardised exam of the Lithuanian language, seeking out methods for effective integration of minorities and assisting these minority representatives when it comes to becoming competitive players in the labour market. The representative also emphasised the difference between individual student funding, as well as remuneration of teachers from Lithuanian schools and national minority schools. Unfortunately, the most pertinent issues were not broached: failure to recognise the rights of national minorities, parents and society in the process prior to and during the implementation of the reform, lack of dialogue, continuous protests of national minorities over the lack of appropriate textbooks and the unreasonably long transitional process, ongoing litigation concerning the accreditation process and the lack of sufficient consultation with society at large.

According to the members of the conference, when taking into account the experiences of different countries and the variety of problems in the field of education and national minorities, the most important element ensuring the rights and interests of all social groups remains dialogue and implementation of the recommendations of international organizations and laws, while including the communities in the decision-making process.

When assessing the situation in Lithuania in terms of the education of national minorities, the best description of it could be a quote from Kalman Petocz, the representative of the Helsinki Committee from Slovakia, who said: “in Slovakia, everything looks nice – but only on paper.”

EFHR, despite the as of yet unresolved issues related to the education of national minorities, is nevertheless pleased with the opportunity to participate in such a prominent conference. The fact that the representatives of Lithuanian institutions took part in discussions needs to be welcomed and acknowledged. The participants also further addressed progress and goals to achieve the ideal of a model democratic country which totally respects the rights of national minorities. It is possible that a real dialogue between the authorities and appropriate social groups will help solve the problems related to national minorities in Lithuania. These issues have been pointed out on numerous occasions by international organizations as well as by EFHR in their reports.