New Procedural Rules of the Court of Justice

The European Foundation of Human Rights informs that the new procedural rules of the Court of Justice enter into force on 1 November 2012. The structure of the rules hasn’t been changed since 4 March 1953; some important changes, however, were introduced.

One of the reasons that affect the change in the rules has been a steady increase in the number of cases, among which the reference for a preliminary ruling are the majority. This means that the Court seeks to adapt to changes in the matters referred to the dispute.

Important information for every voter

The parliamentary elections and referendum on the issue of a new nuclear power station in the Republic of Lithuania will be held on 14 October 2012.

The Foundation, a public benefit organization which main purpose is a concern for the public interest and well-being of the society, deems that the right to vote is one of the fundamental rights and duties granted to the country’s citizens. Consequently, on the basis of the information dated October 6-8, 2012 published in “Kurier Wileński” and the one received from the Central Electoral Commission of the Republic of Lithuania, the Foundation has prepared the most important issues associated with the election law. The main purpose of the initiative is to increase the awareness of the rights and duties concerning the elections in Lithuania. Incitement to hatred on grounds of nationality enters the church 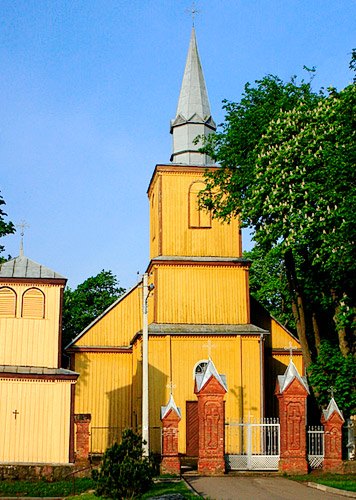 Recently, the European Foundation of Human Rights was positively surprised with the information that a priest defends the rights of the Polish minority in Kaunas (read more: http://kurierwilenski.lt/2012/09/21/ksiadz-litwin-broni-polakow-na-kowienszczyznie/). This is a commendable attitude. Everyone can and must act in defence of human rights, especially the Church and the clergy who represent it.

Unfortunately, the priest Vaidas Vaišvilas cast out Polish tourists from the Divine Mercy Sanctuary. Moreover, the Foundation received information that it’s not the first time when the priest showed discrimination against minority

European Foundation of Human Rights has received a notification that the priest threw Polish tourists out of the Divine Mercy Sanctuary in Vilnius because they were not pilgrims. The situation is really unpleasant, discriminatory on grounds of nationality and humiliating human dignity and honor. According to what the media have reported, the priest threw Polish tourists out just telling them to “get out of here and go to Poland”.

Polish names of streets are an eyesore again

The government established a special working group that developed a new plan aimed at removing the plates with Polish street names. It is planned to place these plates on special poles instead of on the buildings.

Such motives of the government will inevitably affect ethnic minorities in Lithuania, who have spent 20 years now to have street names written in two languages (i.e. Lithuanian and Polish, Belarusian or Russian) in towns densely populated by national minorities (e.g. in Vilnius).

The European Foundation of Human Rights has the pleasure of informing all interested individuals about the possibility of taking part in a free English Language course that will be held over the internet. Participation in this competition is encouraged by the Minority Rights Group International as part of the Global Agency Programme (GPP). The course is aimed at those who work in favour of national minorities in Africa, Asia or Europe. The programme‘s goal is to support representatives of national minorities and work towards utilisation of regional and international mechanisms in order to improve the quality of the mentioned groups.

The European Foundation of Human Rights has proved that The European Union Agency for Fundamental Rights had misinterpreted the results of research carried out by the Institute for Social Research.

In the response to the Foundation’s letter about the 2010 report, the Agency agreed with our notes. The Agency’s report stated that “in Lithuania, 42% of the questioned representatives of minorities said, that they experiencds difficulties on the job market because of little knowledge of the Lithuanian language.”

A month ago, ended the Games of the 2012 summer Olympiad inLondonfame several Lithuanian fans. One of them, a Lithuanian national P. L. has been sentenced to 11 thousands litas fine for that incited racial hatred, spreading monkeys imitate sounds and showing Nazi gestures.

Meanwhile, on another basketball fan cocky behavior investigation lingered, because the police still can’t find the culprit. The later interested the British media,

Don’t be afraid to speak in your native language!

The citizens of the Republic of Lithuania who declare their membership of a national minority often inform the NGO Foundation for Human Rights about infringements of their right to use their native language. Unfortunately, recent changes confirm the EFHR’s concern on the increasing number of such violations (more info: http://www.efhr.eu/2012/08/29/punishing-for-comments-gains-pace/?lang=en; http://www.efhr.eu/2012/01/06/efhr-took-notice-seriously-of-the-survey-published-in-the-issue-of-iq-on-january/?lang=en).

During one of the latest television debates the Minister of Foreign Affairs Audronius Ažubalis pointed out that national minorities do not have to be foreign policy’s hostages. He explained that accusations of violating the rights of Polish minority in Lithuania do not need to be heeded, as, in his opinion, they are unfounded. He quotes this year’s Freedom House report, which states clearly that rights of Polish minority in Lithuania are protected.

European Fundation of Human rights is not gonna give up!

On Agust 17th A.D. Prosecutor of a district of the city Klajpeda overrode the rule of discontinuance. The discontinuance was made because suspected could have not be found. European fundation of Human rights was very pleased with the desicion. An investigation starded on the basis of the clause number 170 part 4 of Penal code of Republic of Lithuania, where the clause says about public incitement to racial hatred as well as humilating commets. Those commets and incitements were seen in Lithuanian information portal : www.lrytas.lt, under the article titled

The European Foundation of Human Rights is against discrimination!

The European Foundation of Human Rights notices that increasingly more often there are job advertisements on the internet that have a discriminating character. As an organisation serving the community, the Foundation with its work contributes to bringing obeying human rights into our everyday lives and is concerned by such advertisements as those mentioned above. Therefore, we would like to give a few pieces of advice on what to do in order to avoid such mistakes when writing job vacancy advertisements. We would like to remind that discrimination is prohibited by both the Lithuanian and international law and regulations. European Citizen, be aware of your rights!

On 6-12 August in Vilnius the summer school “Using Lisbon Treaty for Building Active Citizenship” was held ( read more ). Among 32 participants – representatives of various non-governmental organizations from the European Union and Turkey – the European Foundation for Human Rights was represented by Joanna Gasiul. Employees of the Human Rights Monitoring Institute in Vilnius…

The European Foundation for Human Rights held a charity event for the villagers titled “Kids for Kids” (further info: http://www.efhr.eu/2012/06/27/aid-for-children-placed-childrens-homes/?lang=en) in collaboration with the Centre for Polish Culture and Education ‘Plus’ in Brussels, the Polish School Joachim Lelewel at the Polish Embassy in Brussels and the Middle East Institute Foundation in Warsaw, with help of many other people of good will from Brussels.

The investigation on the “Saw for the Poles” continues

The EFHR effectively fights against the rising tide of hatred on the Internet, as evidenced by the investigation conducted on now defunct group on social network portal called Facebook, titled “Saw for the Poles” (lit. „Lenkpjūvė”). After the discovery of this group, the EFHR put forward an application to the Attorney General of Lithuania (Liertuvos Generalinė Prokuratūra) to bring group’s members to criminal liability for incitement

European Foundation of Human Rights support the decision of OSCE

On the 10th of July, the Central Electoral Commission of the Republic of Lithuania adopted a new electoral district boundaries. The commission’s decision changed the boundaries of several constituencies in Vilnius, Kaunas, Kelme and Vilnius region. Two of them, dominated by Poles (Suzonys and Skirlenai), were incorporated into the „Lithuanian“ Svenchioniu-Moletu constituency. The commission justified its decision claiming that demographic indicators have changed – in some constituencies the population has greatly increased, in others – decreased.

European Foundation of Human Rights expresses concern about the comments

European Foundation of Human Rights continues the campaign against the increasing wave of hatred on the internet in Lithuania. Foundation wishes to express concern about the indifference of the state  authorities to the lawlessness and incitement to hatred directed against a group of persons or a member of such a group on the basis of race, national or ethnic origin, religion or belief. On April 20, the European Foundation of Human Rights promoted applying for participation in the summer school about “Using Lisbon Treaty for Building Active Citizenship” ( for further information look at ). Law students and lawyers working with non-governmental organizations involved in the protection of human rights may apply for participation in the program. After…